WHAT: FESTA DOS TABULEIROS – FEAST OF THE BOARD / FESTIVAL OF THE TRAYS
WHERE: TOMAR, PORTUGAL
WHEN: SATURDAY 29TH JUNE TO MONDAY 8TH JULY 2019
COST: FREE

Spectacular, unique and only held every four years the Festa dos Tabuleiros is a city-wide celebration.

Dating back to the 14th century, during the cult of the Holy Spirit, it reveals the origins of the old harvest feast in bread, wheatears, and flowers on trays that are still the prominent part of the festival today.

The city of Tomar becomes covered in colour, street decorations, and window displays before the festival. In accordance with tradition, there is also a bullfight held on the night before the celebration begins. The parade is held in front of the beautiful Sao Joao Church and is the most important celebration in the city and attracts people from all over the world. 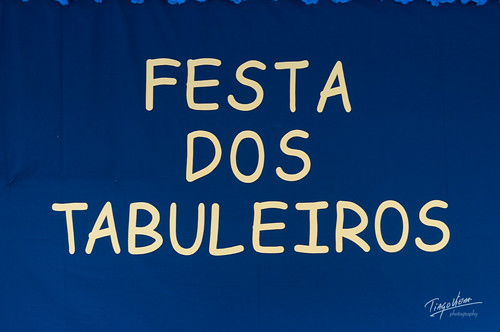 Announcing the beginning of the procession there are pipers and fireworks, led by banners of the Holy Spirit and the several parishes in the area. Parading in pairs are the young girls and boys of the city dressed in white wearing a brightly coloured sash. On the heads of the girls are the tubuleiros; a head-dress tray made up of 30 pieces of stacked bread in either 5 or 6 rows and beautifully decorated with flowers, greenery, and wheat sheaves. At the top is either a crown with the cross of Christ or the dove of the holy ghost. At the rear of the parade, the symbolic white oxen pull along cartloads of bread, wine, and meat that has been blessed by the priest to be handed out to the locals.

The days following the main celebration are not to be missed, with music and dancing in the flower-filled streets, traditional games played and of course plenty of fireworks from dawn till dusk.

We here at Epic had a request recently for fireworks to use in gun-training for dogs in Service and thought we would ...
Read More
Filed in: 2019, FEAST OF THE BOARD, FESTA DOS TABULEIROS, FESTIVAL OF THE TRAYS, POrtugal, TOMAR
Share:
Find us on Facebook Find us on Twitter Find us on Pinterest Find us on Instagram Find us on Tumblr Find us on Vimeo Find us on Youtube Find us on LinkedIn Find us on Flickr
Previous article CAI GUO-QIANG VR FIREWORK ARTWORK