This is a week-long celebration full of flowers, colour, popular animation and of course fireworks.

The roots of the festival date back to the 16th century when a cobbler returned from mass one day and saw a black cross in the earth in Campo de feria. This was known to be a holy sign and it was believed to be a sign of god. From this early stage up to the 19th century, the festival of the cross was solely a religious celebration that attracted many pilgrims from all over Portugal. Today the festival has grown quite considerably and is now a large spectacular affair with plenty to see and do for everyone locals and tourists alike.

Throughout the festival, you will see carnival rides, food and drink stalls, horse racing, plus much more on offer. On the 1st May in the early morning bagpipes and tambourines are played and fireworks are set off to awake the city and announce the grand opening of the festival.

All around Barceló’s springs to life and becomes one big social gathering. Stalls are set up selling food and drink, fresh fruit, gold and silver, pottery and iron wear, along with a vast calendar of sporting, cultural and religious events.

On the river Cavado, near Braga this is where the miracle of the cross procession takes place. Centered on millions of flower petals laid out forming a colourful carpet. Women dress in colourful regional dresses and this is where the night skies are lit with colour and the sound of the firework displays. 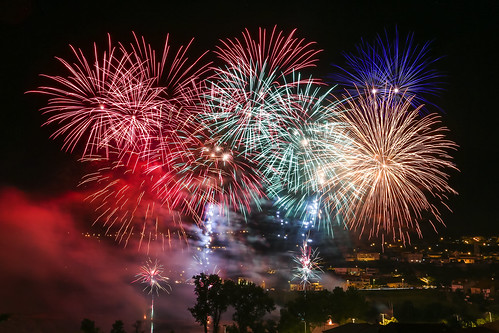 This year there are various firework and pyro-musical fireworks on offer. Prison Fire on the 2nd may a pyrotechnic show that joins the fireworks of April 25th, Fire of the bridge on the 27th April, A pyro musical show on the 30th and Fire of the river on 3rd may. With plenty of choices, the nights on these days will certainly end with a bang.