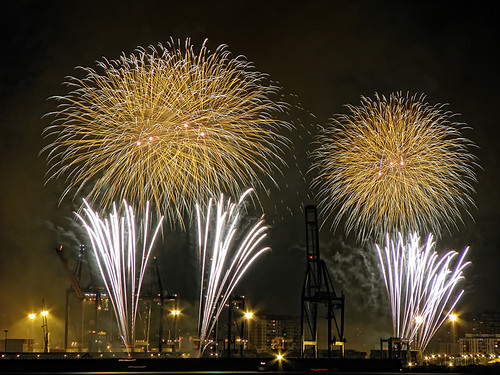 Held in one of Spain’s largest cities, the Feria De Malaga (or fair of Malaga) has been running for the last 526 years and 2013 will once again see a fantastic program of entertainment which is certain to capture the imagination of the masses. The celebrations take place in the beautiful city of Malaga and involve the beach, monuments and of course churches.

The event begins the second Friday in August during the hottest part of the year when temperatures on the Mediterranean reach a balmy 86 degrees Fahrenheit. Starting on a Friday, the celebrations last for 10-days and attract over a million visitors.

The show kicks off with a huge pyro musical fireworks display on the beach and you can enjoy the party atmosphere with food available from any of the concession stands set up on the shoreline.

The entertainment is a rich and varied as the Spanish people with some dressed in traditional flamenco outfits, musical theatre groups, bars, DJ’s and much more.

The fireworks display is second to none and features some spectacular shells and having been lucky enough to visit the event in 2003 with my family (whilst on holiday in Fuengirola) I have to say, with the event being on the beach front, the cool breeze off the Med (if you are lucky enough to get one) is a welcome addition. The party goes on into the wee small hours for those not taking part in the parade on the Saturday!!

There is some pretty beautiful shells with hearts, faces and spaceships along with more than a couple of staggeringly large glittering sphere’s which just hang in the air as if begging to stay there which makes it difficult to choose a favourite. The show starts at 23:50 with the ‘proclamation of the fair’ and then the fireworks start at midnight to music.

Every day from late morning, well into the evening the city is filled with music and traditional dancing with horses and riders adorned in traditional Andalucian costume it is a spectacular sight and one that any discerning firework enthusiast should add to their bucket list.

We have added quite a few new products to our range recently, keep reading to see the details on these. Afterglow Fou...
Read More
Filed in: Feria De Malaga, firework, Fireworks Displays, Malaga, pyro musical, Spain
Share:
Find us on Facebook Find us on Twitter Find us on Pinterest Find us on Instagram Find us on Tumblr Find us on Vimeo Find us on Youtube Find us on LinkedIn Find us on Flickr
Previous article SOUTHEND’S FIREWORK DISPLAY IS TO MAKE A COMEBACK THIS YEAR!