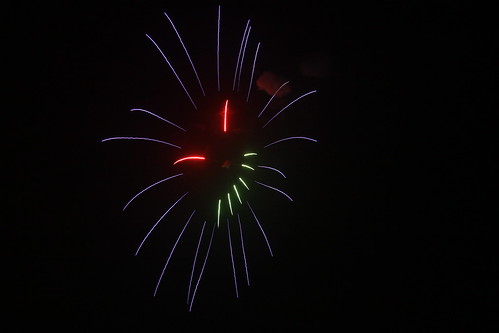 FIREWORKS, which originated in ancient China in the 12th century, are believed to be useful to get rid of bad luck. Chinese people traditionally light fireworks at important events and festivities.

To most Chinese, this year's National Day holiday has a very special meaning as it celebrates the 60th anniversary of the founding of the People's Republic of China.

Firework shows will undoubtedly be a highlight of the holiday week and the ongoing Shanghai Tourism Festival.

The 10th Shanghai International Music Fireworks Festival will kick off on September 30 at Century Park in Pudong with three spectacular shows by pyrotechnic designers from Italy, England and Switzerland.

Before each of the 25-minute shows, there will be another 25-minute Chinese-style fireworks performances accompanied by classic Chinese music such as the "Yellow River Cantata" and the "Butterfly Lovers Concerto."

The festival has invited two acclaimed fireworks experts to be the judges - Ardell Edward, former president of the International Pyrotechnics Society (2002-2004), and Swedish pyrotechnic designer Soderberg Gunnar who has 45 years' experience in fireworks displays.

"The experts will select the most fabulous and creative one among all the performances," says Li Zhengming, director of the festival's organizing committee.

The three exotic shows are of different designs and styles. The Italian show on September 30, themed "The Life Through Love, Sentiments and Memories," is created by Maxtro srl-Ipon, an Italian fireworks company.

The performance is based on well-known film melodies.

Audiences will be involved in a romantic story through fireworks and beautiful music from "Flicka," "Steel Magnolias," "Titanic," "Peter Pan" and the "Harry Potter" saga.

On October 3, designers from UK's Pyrovision company will present another show titled "Hope and Glory." The performance will open with the instantly recognizable James Bond theme.

To pay tribute to the UK's musical achievements, the show will combine music, fireworks and lasers.

The repertoire will include songs by the Beatles, "Jerusalem," the unofficial anthem of England and Take That's "Rule the World."

Created by designers from the Bugano family firm, the Swiss show on October 6 entitled "Grand Tour of Switzerland" will be a creative, colorful and musical tribute reflecting the captivating charm of the country.

It will lead people onto an unforgettable promenade through dense forests and snow-covered mountains, modern cityscapes and medieval villages.

"This year's show aims to provide an insight into the fireworks culture and industry," Li adds. "We will host more fireworks showcase and forums to facilitate international exchanges."

WHAT: Planet CoasterWHY: A fantastic theme park and firework simulator.WHEN: Out now.WHERE: Most gaming platforms.COS...
Read More
Filed in: firework competition, Fireworks, Pyrovision, Shanghai International Music Fireworks Festival
Share:
Find us on Facebook Find us on Twitter Find us on Pinterest Find us on Instagram Find us on Tumblr Find us on Vimeo Find us on Youtube Find us on LinkedIn Find us on Flickr
Previous article TONEGAWA FIREWORKS FESTIVAL 2022