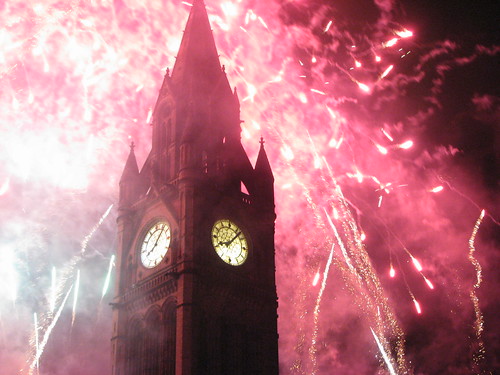 MANCHESTER will join some of the world's biggest cities with a firework display to bring in the new decade.

The free, family event will take place in Exchange Square, in the city centre, on New Year's Eve.

It is only the second year the city has put on an official event, on December 31, since the Millennium.

In years before that, hundreds of people would routinely gather outside the town hall to celebrate New Year's Eve – only to be greeted by a solitary rocket on the stroke of midnight.

World Tourist Attractions, who owns the square's Wheel of Manchester, will fund this year's £50,000 display to send out 'the noughties' and welcome 2010.

The winners of festive council-run talent contest Yule Tube – which is searching for ten acts to deliver the city's Christmas message to the world – will be shown on the big screen as part of the celebrations.

Pat Karney, the council's city centre spokesman, said: “You don’t need to go to Sydney, New York or even Edinburgh to welcome in the new decade in style – the best party is going to be right here in Manchester.

Check the best spots to view the fireworks in Manchester for New Year's Eve and find the best views of the New Years Eve Fireworks Display in Manchester.