Launched in Belfast in 2007 by motivational speaker and British entrepreneur Steve Legg, Sorted was recently voted as the world’s most wholesome men’s magazine. The associated charity, “Breakout Trust” ensure that sixty-two of the UK’s prisons receive free copies on a regular basis along with HM forces across the world and regularly delivery free copies into Alcohol and Drug Rehabilitation Centres throughout the UK.

The magazine for the non-subscribers among you claims their success is all down to their no-nonsense regular features looking into faith, finance, fitness, passion and purity, motoring, movies, football and other sports, popular literature, movie news, addictions, accountability, mentoring and encouraging each other. They also have a Gadgets expert and a motoring correspondent as well as a ’60 Second Life Coach’ and a ‘Sex Doc’.

With Bear Grylls as a fan and featuring Epic Fireworks for the last few years, we expect the readership to keep going from strength to strength and wish them all the best. 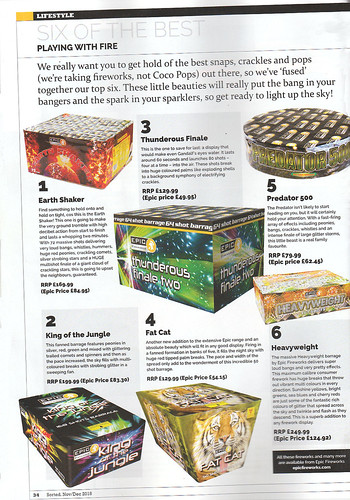 WHAT: La Merce Festival 2023WHY: Celebration of Barcelona’s patron saintWHEN: 21st – 26th September 2023WHERE: Barcel...
Read More
Filed in: Epic Fireworks, EPIC GETS SORTED, Sorted Magazine
Share:
Find us on Facebook Find us on Twitter Find us on Pinterest Find us on Instagram Find us on Tumblr Find us on Vimeo Find us on Youtube Find us on LinkedIn Find us on Flickr
Previous article AUTUMN LIGHTS RETURNS!