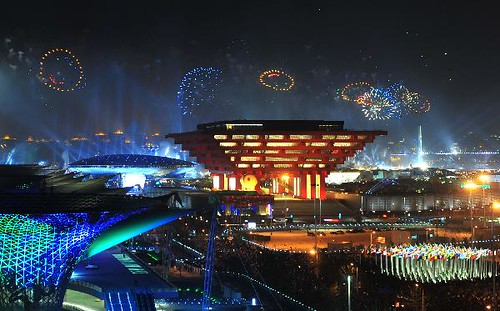 China has turned on the epic fireworks and dancing water to launch the World Expo 2010 in Shanghai. The country hopes the event will showcase its achievements to the rest of the world.

Most of the fireworks were spectacular, although many of the “oohs” and “aahs” were reserved for the explosives that shot off bridges and fountains that sent water up as high as 80 metres.

In one spectacular episode, 6,000 LED fuchsia, red and yellow balls floated in the murky Huangpu River, creating a bright sea of balloons against the black water.

“The World Expo is a grand event to showcase the best achievements of human civilisation,” President Hu Jintao told a welcome dinner for foreign leaders. “It is also a great occasion for people from around the world to share joy and friendship.

“As the first registered World Expo hosted by a developing country, the Shanghai Expo will be an opportunity for China and also for the world,” Mr Hu added.

The Expo aims to showcase the latest technology and inventions from 189 countries ranging from the US and Germany to North Korea and financially devastated Iceland and Greece.

Some of the rules being enforced are harmless enough, such as warnings to Shanghaiese not to walk around in public in their pyjamas. Kites are banned near the site, and you cannot buy knives in supermarkets either.

The security measures include swabbing travellers for explosives at Chinese airports, X-raying bags on the subway and even warning people not to hang their laundry outside.

Shanghai security authorities have set up hotlines with security officers of all 242 countries, regions and international organisations that are involved in the Expo, which will run from May 1st to October 31st.

All of this costs money. The official version has it that China spent €3.19 million – double the outlay for the Beijing Olympics – to host the Expo.

Local media says that once you factor in the infrastructure spend and other measures to modernise and upgrade China’s financial centre, that figure looks more like €44 billion.

The Expo has had an easier run- in than the Olympics, whose preparations were marred by the torch run around the world, which became a focal point for protests against China’s policy on Tibet.

People were harassed for using “protest zones” around the city and the authoritarian nature of the government was a topic of debate heading into the games.

The approach on Expo is much more sophisticated and the crackdown on dissent has been more low-key than it was before the Olympics.

WHAT: Fireworks, bonfire and loads of entertainment!WHY: A brilliant event full of shows, food trucks, warm drinks, a...
Read More
Filed in: china expo 2010, Expo 2010 Shanghai China, Fireworks, fireworks display, opening ceremony
Share:
Find us on Facebook Find us on Twitter Find us on Pinterest Find us on Instagram Find us on Tumblr Find us on Vimeo Find us on Youtube Find us on LinkedIn Find us on Flickr
Previous article BRITISH FIREWORK CHAMPIONSHIPS RESULTS 2021