The Edinburgh Virgin Money Festival kicks off with music from Russian Composer Sergei Prokofiev's Romeo & Juliet ballet, Bernstein’s West Side story among others and accompanied by 40,000 fireworks as performed by the Scottish Chamber orchestra starting at 21.30

Since 1984, Keith Webb from display firework specialists Pyrovision has fired the show each year. 2016 marks the company’s and Keith’s 34th show.

Tickets usually sell out quickly but due to the scale of the show there are many spots across the city to see the fireworks.
If you are unlucky enough not to have obtained tickets then head over to Inverleith Park where a big screen has been erected to save you straining your neck to the heavens as the show bursts high overhead. 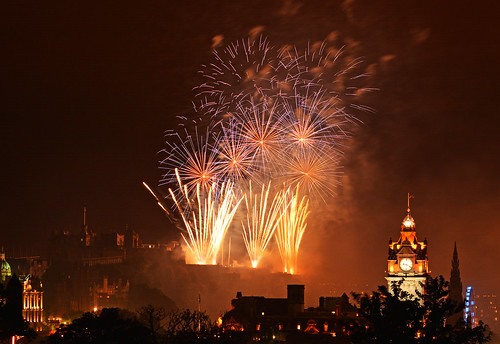 At 151 feet above sea level Salisbury Crags is also an Ideal spot for spectators but it does get very busy. For the more active, continue up to Arthurs seat; but with an 823 feet climb this is not for everyone. Bruntfield links is a very popular spot as is Calton Hill but again get their early for the better viewing spots.

At present the met office suggest the temperature will be around 16 degrees with a partly sunny/cloudy evening so all looks good but as this is the UK don’t rely on this so far ahead, make your own arrangements on the day. With an expected attendance of around 25,000 parking can be an issue, extra public transports links have been put in place for the event so I would recommend using these to get around and save some stress.

The popularity of the flying lantern is largely due to the Lantern Festival celebrated on 15th day of the first month...
Read More
Filed in: 2016, edinburgh, EDINBURGH VIRGIN MONEY FESTIVAL 2016, festival, firework display, Fireworks, Virgin Money
Share:
Find us on Facebook Find us on Twitter Find us on Pinterest Find us on Instagram Find us on Tumblr Find us on Vimeo Find us on Youtube Find us on LinkedIn Find us on Flickr
Previous article PLEASE STAY SAFE :)