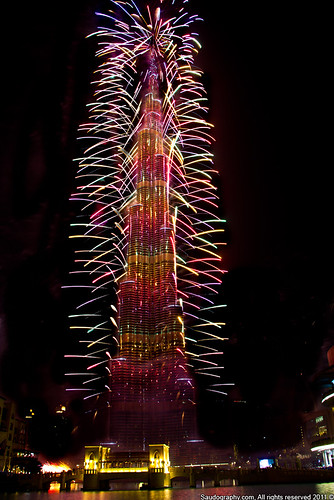 There are very few places in the World that I would really like to visit, but Dubai has to be one of them.

This cosmopolitan City houses an incredible amount of wealth and influence and is not afraid to spend.

In 2010 the tallest building in the World, the Burj Khalifa, was unveiled in Dubai. Costing an impressive $1.3 billion dollars and an incredible 2716.5 ft (828 metres) high, this tower is impressive in its own right.

From early evening the crowds started to gather in the streets of the city, making their way to the building where the fireworks were set up. Throngs of city dwellers and those simply visiting Dubai for the festivities, were given a countdown on a giant screen.

The pyro, handled by Al-Zarooni, cost an undisclosed sum but was according to eyewitnesses on-site ‘breathtaking’, ‘Unparalleled’ and the ‘ best in my lifetime’. The much-anticipated show, celebrating the second anniversary was beamed by TV into 2 billion homes around the UAE and the rest of the World.

Check out the display:

Bastille Day is France’s most important national holiday and commemorates the storming of the Bastille which took pla...
Read More
Filed in: 2012, dubai, Fireworks, new year
Share:
Find us on Facebook Find us on Twitter Find us on Pinterest Find us on Instagram Find us on Tumblr Find us on Vimeo Find us on Youtube Find us on LinkedIn Find us on Flickr
Previous article TONEGAWA FIREWORKS FESTIVAL 2022