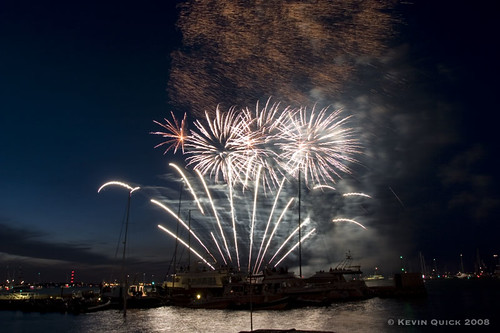 The future of the much loved Cowes week traditional final night firework show was in serious jeopardy for a time but thankfully, is now back as planned.

The issue was funding for the event in this cash-strapped economy but thanks to the organisers and supporters of Cowes week, Aberdeen Asset Management, this has now been resolved successfully.

The organisers look forward to working with Cowes fireworks committee to ensure that this year’s event is truly spectacular.

The Final Friday firework party will feature the bands The Manfreds and The Accelerators who are sure to get everyone in the party mood. If you don’t object to a wee tipple or two, you have it made with the likes of ‘The Pimms Bus’, ‘Fullers Real Ale Bar’, ‘The Beer Tent’ and ‘The Mahiki Bar’ as well as a whole host of food establishments to keep you going until the wee small hours.

If you prefer something a little more retro, you could try out ‘Club Tropicana’ featuring 80’s electric pop and soul, laser light show and neon cocktails aplenty.

Whilst we are aware that August is some way into late Summer, these events sell out really quickly so we recommend that you book early to avoid disappointment.

Last year being the first year since 1997 the British Fireworks Championship had to be reluctantly cancelled due to t...
Read More

FIREWORKS MARK THE END OF THE 2020 OLYMPICS