Close to the action 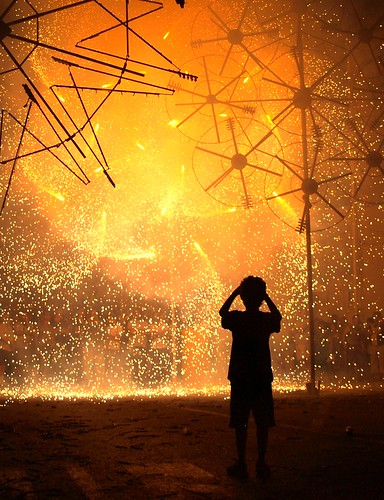 This young lad is probably closer than 25Metres from the fireworks here. I wonder if he is wearing safety goggles? He seems to be adjusting something on his face. Parents! keep an eye on your kids at fireworks displays!

This is a great shot of the crowd enjoying the fireworks, it looks like they are standing very close to the action but in all likelihood, they are quite a distance from it, the silhouetted figures are a nice effect and make for a really nice photo.

Dancing near the fireworks. This is strongly not recommended.

GI Joe (Action Man for the UK) is standing way too close to the fireworks. However he is a brave soldier, and being made of plastic means that no-one can really get hurt.

OK, this guy is definitely made of plastic and as such is also guaranteed to walk away without a scratch. This lego chap should still not be holding a firework as we all know that it is very dangerous. Fireworks Safety is important people!

Even Mickey is getting in on the action "look at me kids! I'm playing with fireworks!" Probably not the best message to send out there Mickey. I hope there was some kind of disclaimer after the show warning people not to attempt this themselves....Speaking of which...Do not attempt to do any of this yourselves people. All the pictures featured here showed trained professionals/plastic toys/muppets who don't know any better. You do know better so never fool with fireworks.

Every year around the world, people gather to watch the clock tick over from 11:59pm on December 31st, to 12:00am on ...
Read More
Filed in: action, Fireworks, Fireworks Displays, photo
Share:
Find us on Facebook Find us on Twitter Find us on Pinterest Find us on Instagram Find us on Tumblr Find us on Vimeo Find us on Youtube Find us on LinkedIn Find us on Flickr
Previous article TAMWORTH FIREWORK DISPLAY BACK WITH A BANG