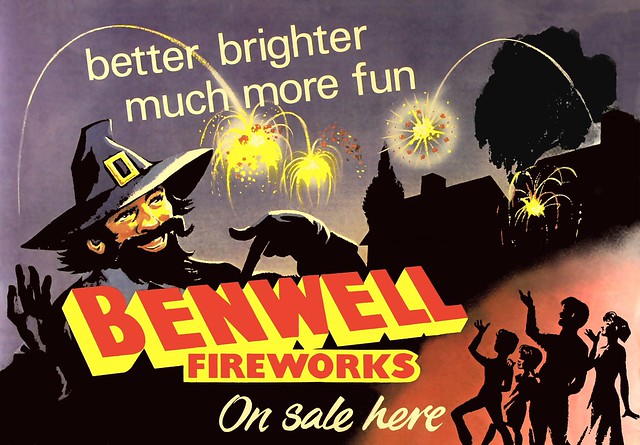 Benwell Fireworks was established in 1949 by Benjamin Weller who was said to be a toy manufacturer by trade. The company operated out of Draycott, Derbyshire until 1974 until they moved in 1988. The company was sold to a Chinese company which later became Black Cast Fireworks.

In the poster, they have incorporated the Mum, Dad, and regulatory two children which of course were a boy and a girl signifying the ‘ideal’ family unit. Funny thing though, the little boy looks like an extra from the Michael Jackson ‘Thriller’ video.

There are a few examples of Benwell memorabilia about but most of them nowadays are in private collections.

WHAT: THUNDER OVER LOUISVILLE 2023WHY: FIREWORKS AND AIRSHOW EVENTWHEN: SATURDAY 22nd APRIL 2023WHERE: LOUISVILLE, KE...
Read More
Filed in: benwell fireworks, firework poster, Poster
Share:
Find us on Facebook Find us on Twitter Find us on Pinterest Find us on Instagram Find us on Tumblr Find us on Vimeo Find us on Youtube Find us on LinkedIn Find us on Flickr
Previous article AUTUMN LIGHTS RETURNS!