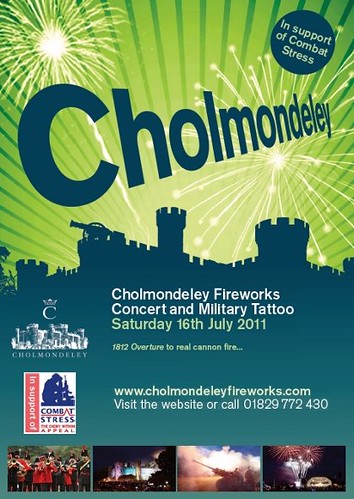 WHAT: Cholmondeley Castle Fireworks Concert and Military Tattoo
WHERE: Cholmondeley Estate - Cheshire - SY14 8AH
WHEN: 15th -17th July 2011
WHAT TIME: Gates for the fireworks concert open at 4.00pm on Saturday 16th July and the event ends at around 10.30pm

Following the success of the 2010 Cholmondeley Pageant of Power, the event organisers have confirmed that this year’s Pageant will be even will be bigger, brighter and louder than ever in 2011. The Pageant takes place over three days (15th to 17th July 2011), with the hugely popular fireworks concert and military tattoo being held on the evening of Saturday 16th July.

The Cholmondeley fireworks concert has been the most anticipated highlight of the region’s social calendar since 1989, it's exceptional setting, breathtaking fireworks and emotive music all contributing to a ‘Proms in the Park’ atmosphere.

Last year the concert raised over £75,000 for Help for Heroes, and Combat Stress the UK’s leading military charity specialising in the care of veterans’ mental health has been chosen as the beneficiary in 2011.

With the renowned Tim Redmond conducting, the concert will start with the Mossley Brass Band and Military Marching Bands, followed by the Manchester Camerata Orchestra taking to the stage for a ’Last Night of the Proms’-style sequence. The ensembles will perform a packed programme of rousing and evocative pieces, including crowd-pleasing themes from the Dambusters and Goldfinger movies, as well as the Top Gear signature tune to excite the many petrolheads in attendance.

James Hall, Events Director for the Cholmondeley Pageant of Power, commented: “The 2010 Fireworks Concert was a wonderful occasion with record visitor numbers and a huge amount raised for charity. We have not rested on our laurels and I have no doubt that this year’s concert will be the best ever, with a thrilling concert programme and a sensational fireworks display.”

The highlight of the evening will be the mammoth firework spectacular lasting around 20 minutes. This unforgettable pyrotechnic display is the glorious culmination of a wonderful event. Fireworks and music come together to create a stunning climax the memory of which will linger for a long time after the tattoo and concert have finished.

Entrance gates for the fireworks concert open at 4.00pm on Saturday 16th July and the event comes to a close at approximately 10.30pm. The breathtaking beauty of the Castle, set in picturesque grounds will provide the backdrop to this spectacular event. Viewers are welcome to bring along chairs and a picnic to enjoy from the Castle Lawn. This year there will also be a bar and restaurant facility available. Ticket booking details and further Event information can be found at www.cpop.co.uk or by calling the ticket hotline on 01829 772 432.

Here at Epic we celebrate all cultures and celebrations and Chinese new year is no different so here are some facts y...
Read More
Filed in: 2011, Cholmondeley Pageant of Power, cpop, Fireworks
Share:
Find us on Facebook Find us on Twitter Find us on Pinterest Find us on Instagram Find us on Tumblr Find us on Vimeo Find us on Youtube Find us on LinkedIn Find us on Flickr
Previous article BUYING FIREWORKS AS A GIFT