CHINESE NEW YEAR 2016. LONDON CELEBRATES THE YEAR OF THE MONKEY

Over the next few days over a billion Chinese will be making travel plans to return home to celebrate their Spring Festival.

The Spring Festival last for over a month with the first few days being akin to our bank holidays, with many Chinese businesses closing or operating on reduced hours.

As the Moon transcends across the sky on the 8th of February it will welcome a new Chinese year, this year it is the year of the monkey.

If you were born in 1944, 1956, 1968, 1980, or 2004 then you are a monkey. Monkey people are well known as being wit, charm and intelligence, but are also practical jokers often mischievous and sometime a little naughty. Thanks to their outgoing and highly confident nature, people like to be around monkey folk as they tend to be the life and soul of the party.

Those born in the year of the monkey should be associated with the colours blue, white & gold, avoiding any shade of red as this may bring them bad luck.
The numbers four and nine will bring prosperity in a monkey year whilst two and seven should be avoided at all costs.

Shape shifting monkeys are believed in Chinese mythology to have been our ancestors for over two thousands of years, the Chinese being aware of our evolutionary status a long time before Darwin’s theory of evolution publication in 1838 proving we did descend from apes.

Many Chinese and Buddhist deities have been recorded in legend as taking monkey form at some time, the most famous being Sun Wukong “The Monkey King” from the novel “Journey to the West”.

One of the best places to be (apart from China obviously) to see the stunning cultural delights of the Chinese New Year celebration will be China Town in London. Between Old Compton Road and Leicester Square, the atmosphere will be colourful and noisy to say the least. Starting of the 4th of February, London’s first Chinese lantern festival descends on Chiswick House and gardens on Burlington Lane W4 London, for five weeks. On display will be more than 50 life-sized lanterns resembling Zebra’s, Kangaroo’s, Flamingo’s, a sixty metre Dragon and even a full size Elephant crafted from bamboo and paper. There will also be a number of other activities; from traditional Chinese street/performance theatre to art and lighting installations.

The “Enchanted Forest” is set to be a big hit as gigantic mushrooms, plants and flowers will amuse all ages, I imagine it to resemble the set of “Alice in wonderland” when Alice meets the Caterpillar.

Tickets are £16 for adults, £10 for children. As always parking can be an issue at large events, but either Turnham Green Tube station or Chiswick station will drop you off close by.

On 14th February there will be a ‘Grand Parade’ which incorporates ten ‘lion’ teams in what is set to be Europe’s biggest lion dance which begins at 10am from Trafalgar Square via the West End and on to Chinatown. At mid-day, the stage performances get under way with traditional dance troupes, acrobats, dragon and flying dances, opera and martial arts performances.

As the day comes to a conclusion, there will be a Grand Finale at 5.20pm as Monkey dancers and acrobats take to the stage to celebrate the year of the Monkey and stunning pyrotechnics will illuminate Nelson’s Column.

All of the finest Chinese restaurants will be booked up shortly so to avoid missing out on the celebrations with the family, book your place now.

It only remains for us to say ‘Xin Nian Kuai Le’ (Mandarin) or ‘San Nin Faai Lok’. 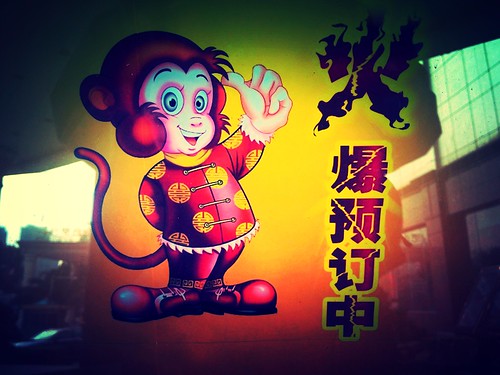 WHAT: Flamborough Fire FestivalWHY: New Year CelebrationsWHERE: The Festival Arena is situated at Mereside, Flamborou...
Read More
Filed in: Chinese New Year, London, THE YEAR OF THE MONKEY
Share:
Find us on Facebook Find us on Twitter Find us on Pinterest Find us on Instagram Find us on Tumblr Find us on Vimeo Find us on Youtube Find us on LinkedIn Find us on Flickr
Previous article THE HISTORY OF SKY LANTERNS