Canada To Stage Its BIGGEST Fireworks Display Ever 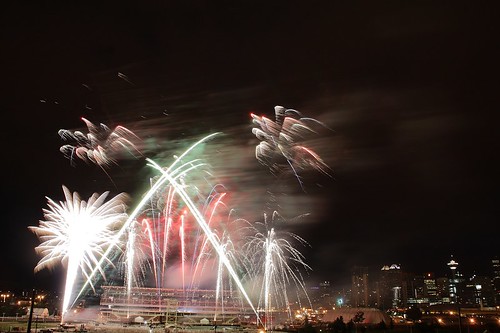 Ask any Canadian which is the world biggest and best rodeo in the world and the answer will surely be “The Calgary Stampede”. This year the event runs from the 6th to the 15th of July.

Having been lucky enough to attend the Calgary Stampede back in 1981, of all the events I've attended in my life this one really stands out as possibly the biggest and best, most exciting and on some level the scariest thing I have done to date.

The show grounds open at a very early 8am. There are literally 1000s of things to do, see, and try out. The event runs over a ten day period and you should expect to see concerts from some of the biggest country stars as well as chilli eating competitions (not for the feint hearted), rope skills, chuck wagon racing (which is just crazy), bull riding, shooting competitions, displays from the Royal Canadian Mounted Police, acrobatic shows, ice displays, the Superdogs show,blacksmiths, stock dogs, working cow horses, cowboy poets, heavy horses, trick riders, and of course our favourite FIREWORKS.

The list of entertainment events is almost endless, trust me, you will need a few days off work to recover. For the bravest of you, you can gain a little kudos and get a t-shirt by trying a prairie oyster (best hangover cure ever) at Buzzard's Cowboy Cuisine. All the entertainment around the Coca-Cola stage is free, with a little picnic area just behind called Weadickville, which is a great place to chill out, as it tends to be a bit quieter there.

The dress is, of course, optional, but unofficially deemed as “country”. Expect to see jeans (the Cowgirls seemed to have some sort of competition going on as to ‘who could wear the tightest jeans’ - not a bad thing for a group of 19-21-year-old lads out for a good time, I hasten to add) and cowboy hats everywhere. My tip is to ensure that if you are going to purchase a cowboy hat that you should get one before you go in as:
a) you will stand out like a blind cobblers thumb
b) they are very overpriced once you get in

Parking at the grounds is a nightmare, but you can easily avoid parking stresses by taking the C-Train to the Stampede grounds. There are two C-Train stations that connect directly to the Stampede grounds, these are at Victoria Park / Stampede Station at the north end (near the BMO Round-Up Centre), and Erlton / Stampede Station at the south end (near the Indian Village).

Tickets can be bought on the day from as little as $16 for a general ticket or in advance at http://cs.calgarystampede.com/tickets/ (if you want a Grandstand seat, this is the best option).

The fireworks usually start around 11pm every night, but watch for a huge red flare rocket sent up about ten minutes before the start of the show.

Bear in mind that the drinks and food do tend to be a bit more expensive in the show grounds, but there are no restrictions about taking your own (bottled water was double the cost of the local grocer’s store).
The weather can be a bit unpredictable so take a light “pack-a-mack” style coat.

Also very few of the stalls or indeed the ticket offices accept credit or debit cards so carry cash, but keep it somewhere safe, as with all large gatherings there is always someone waiting to spoil the party, and make a quick buck.