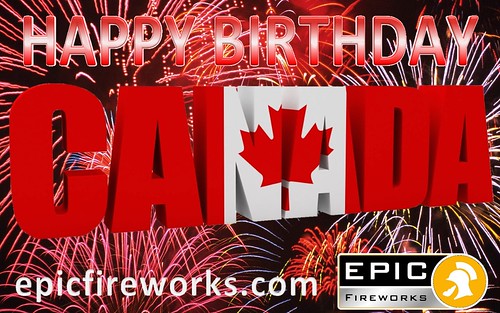 Annually, since 1st July 1867, Canada has celebrated Canada Day. The unification of Nova Scotia, New Brunswick, and the Province of Canada into a single country was as a result of the unification act which brought forth the independence of Canada from English rule. However, the independence was not a rushed matter as the independence was not fully completed until 1982, some 115 years later when the 1st July was made an official National Holiday. Today, the celebrations are noted all over Canada and take many different forms, many of which are concentrated around the nation's capital Ottowa.

Originally called Dominion Day, or in French (as there are still a great many areas of Canada which continue to use French as their first language) Le Jour de la Confédération, has no 'format' as the celebrations, particularly in major towns and cities continue to focus on concerts and family events including cook-outs, barbecues and fireworks.

Canadian pride is not limited to the confines of their own country though and in London's Trafalgar Square, they hold a massive street event including street Hockey (hockey being the national sport of Canada) along with a number of other performers.

Ultimately, whether you are in Canada or anywhere in the World, there will be some form of celebration taking place. So, if you happen to be in the UK and plan to celebrate the independence of this beautiful country with family and friends this year, why not include a fantastic fireworks display to the wonderment of your gathered family and close friends. Our fireworks are half price, and being on average 5 times better than those available in Canada and the States, we guarantee that you will not have experienced semi-professional fireworks, available to the general public before. We are open 7-days a week and would love to chat with you about your upcoming holiday celebrations to see if we have a pack to suit your needs. We are open 7-days a week, and are a couple of minutes off the M1 or we can utilise our licensed couriers to have them delivered to you directly.

Wherever you are to be this year, have a great day and keep safe and well.

Here's a video below from last years firework show.

WHAT: La Merce Festival 2023WHY: Celebration of Barcelona’s patron saintWHEN: 21st – 26th September 2023WHERE: Barcel...
Read More
Filed in: 1st july, Canada, Canada Day, Celebrations, firework, Fireworks
Share:
Find us on Facebook Find us on Twitter Find us on Pinterest Find us on Instagram Find us on Tumblr Find us on Vimeo Find us on Youtube Find us on LinkedIn Find us on Flickr
Previous article SOUTHEND’S FIREWORK DISPLAY IS TO MAKE A COMEBACK THIS YEAR!