WHAT: BURNING OF THE CLAVIE
WHERE: BURGHEAD, MORAY, SCOTLAND
WHEN: SATURDAY 11TH JANUARY 2020
COST: FREE TO ATTEND

Each January, on the 11th of the month, the small village of Burghead on the coast of Scotland, an ancient pagan ceremony takes place known as the Burning of the Clavie. This ceremony roars through the Streets on the celebration of the original New Year’s Day, erased following the implementation of the Gregorian calendar.

It is unknown when this unique Fire Festival began, but it is believed to date back to at least the 1700s when the Julian calendar was reformed in Britain. The new Gregorian calendar was introduced, and this angered a lot of people who formed and demanded back the 11 days. For Burghead this was not a problem, and instead of protesting on the fact that the calendar changed, they decided to have the best of both worlds and celebrated the New Year twice, once on the 1st and again on the 11th of January. 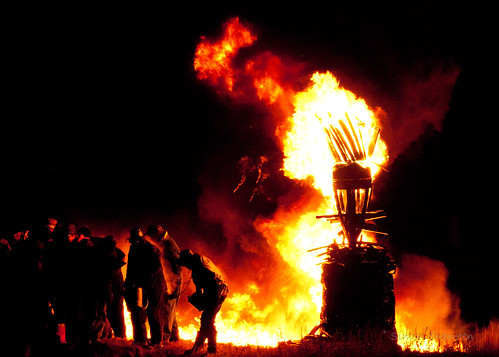 The “Clavie” is prepared several months in advance as it needs to prepare to burn throughout the festival and late on into the night. It consists of a cask that is split in half and filled with bits of wood and coated in tar. It is nailed onto a pole with enough space left for the carrier to fit their head in between the staves 6 in total ready for carrying through the town.

The Clavie crew, as they are known, consists of a group of 15 men (traditionally fishermen) headed up by the Clavie King. Each takes a turn in carrying the Clavie on the parade route around the fishing village, stopping and presenting bits of the smoldering embers to the three public houses in the village; this is to bring them good luck for the following year.

At the end of the route, the Clavie is taken to Doorie Hill and placed on the stone altar where more fuel is added bringing a big orange glow to the skies. When the barrel eventually dies down and collapses the blazing embers are normally collected by the locals and either taken back home where they put them in their hearth at home as this is believed to prevent any bad spirits or witches coming down their chimneys and bringing bad luck into the household. Some gather the embers to give out as gifts for the same reason and some are even posted out around the world to exiled ‘brochers’ (natives living overseas).

For a New Years' Eve night with a difference, why not plan a trip to the small town of Moray this January.

WHAT: Evening of shows and entertainment at Sheffield Botanical Gardens.WHY: To celebrate Bonfire weekend!WHERE: Bota...
Read More
Filed in: BURNING OF THE CLAVIE, Scotland
Share:
Find us on Facebook Find us on Twitter Find us on Pinterest Find us on Instagram Find us on Tumblr Find us on Vimeo Find us on Youtube Find us on LinkedIn Find us on Flickr
Previous article FIREWORKS CHAMPIONS AT NEWBY HALL