Burj Khalifa Fireworks in Dubai, Tallest Building in the World 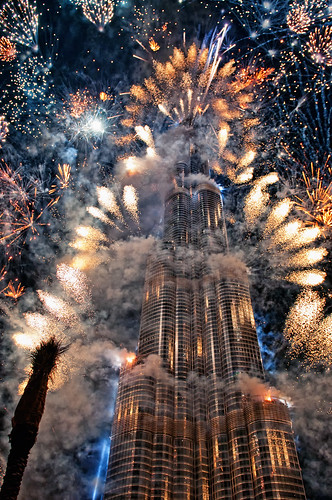 Superb photograph from the opening ceremony of The Burj Khalifa on 04/01/2010. This is now the tallest building in the world.

Half a mile tall - 168 floors. The design is said to be inspired by the shape of a desert flower. It cost 1.5 billion dollars and took 6 years to complete, bargain.

Heres the video of the opening ceremony which launched more than 10,000 individual fireworks and also feature some cool light show using the 868 stroboscopic lights that are built into the tower and some pretty funky beams on the ground.

And on a completely different note, but just to give you an idea of the size of the thing here is a cool video of 2 daredevils base jumping from the building. Awesome.

We here at Epic had a request recently for fireworks to use in gun-training for dogs in Service and thought we would ...
Read More
Filed in: burj khalifa, burjkhalifa, dubai, Fireworks, opening ceremony, Skyscraper
Share:
Find us on Facebook Find us on Twitter Find us on Pinterest Find us on Instagram Find us on Tumblr Find us on Vimeo Find us on Youtube Find us on LinkedIn Find us on Flickr
Previous article PLEASE STAY SAFE :)