Last year, the Covid-19 pandemic meant that sadly the 2020 British Firework Championships had to be cancelled. This year the prestigious event returns and almost all display teams confirmed last year have again confirmed their participation for this year's event. The only change in line-up appears to be the retraction of Bright Sparks, from North Wales, and instead Fully Fused Fireworks, from Shefford, step up to the challenge of competing for the title of 'British Firework Champions'. 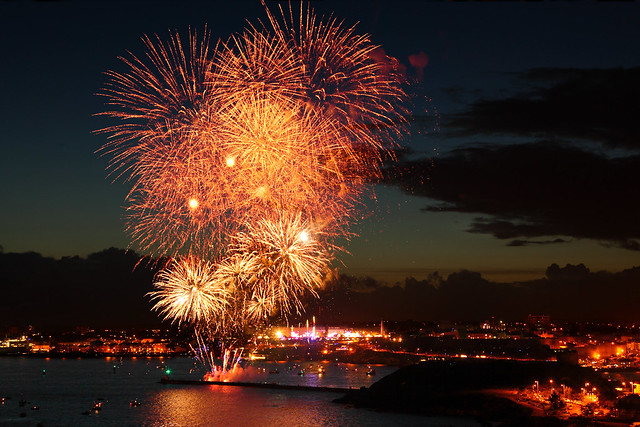 Started in 1997 the Plymouth British Firework Championship is still regarded as the pinnacle of firework events, and display companies often go above and beyond to showcase the very best pyrotechnic talent seen within the UK. Recognised as the country's premier firework event the two-day experience promises to offer truly staggering performances.

The winning team from each year goes forward and after a period of 5 years these successful display companies are entered into a 'champion of champions' event. Also competing against these teams shall be Selstar Fireworks, who in 2019 were the latest champion of champions. The winners of this very distinguished event quite rightly earn ultimate bragging rights as the very best of the best!

The British Firework Championships are situated in Plymouth's harbour, an idyllic backdrop to the staggering beauty which at night fills the sky above. A large funfair and live music are also present, and therefore guests of all ages are guaranteed a fantastic time. The championship is free to attend and will showcase unforgettable displays of firework finery.

The list of pyrotechnic competitors for this year’s British Fireworks Championships are as follows:

A J PYROTECHNICS – FOLKESTONE - AJ Pyrotechnics, based on the Kent coast, were formed in 2008 but are relatively new to the competitive display circuit. In 2017, they appeared at Plymouth for their first time and this year have greater talent to showcase.

AURORA FIREWORKS – BILLINGSHURST - Aurora were established in 1996 and have never looked back. They competed in 2016 which earned them a well-deserved second place and sadly in 2019 failed to fire due to technical issues.

FULLY FUSED FIREWORKS – SHEFFORD - The team from Fully Fused have been at the forefront of National and International displays, both in competition and for overseas clientele. They have been creating awe-inspiring displays for more than 30 years, and you can expect a truly magical display from them.

SKYBURST THE FIREWORK COMPANY – BRISTOL - Founded in 1982, Bristol-based Skyburst are well known for pushing boundaries. They appeared at Plymouth in 2011 and have competed in many different events since whilst constantly honing their skills.

THE FIREWORKERS – DRIFFIELD - The Fireworkers are a family business based in East Yorkshire. Established in 2009 they have performed displays at the Southport British Musical Firework Championships as well as working internationally in Malta for the International Fireworks Festival and celebration events in Valletta.

At this time, we are not aware of the firing order, but we will of course update you as soon as we know.

At the last event, held in 2019, 1st Galaxy Fireworks were crowned the 2019 winning team, meanwhile Selstar Fireworks took the title of 'champion of champions'.