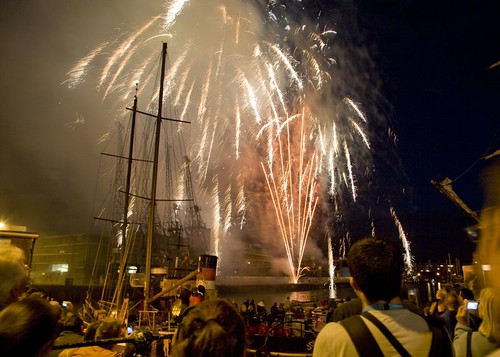 Anyone who lives around the Bristol area will have probably have the dates 26th-28th July pencilled in on the calendar already, as one of the biggest free festivals in the UK goes ahead.

With over 250,000 festival fans partying over the three days the two-mile stretch of the harbour will be buzzing as Bristol county council stage this event along with Richmond event management, special thanks go out to Umberslade for the kind use of their land and GE oil and gas who are sponsoring the finale.

The most popular and anticipated part of the show takes place on Saturday the 27th July at 10:00pm at the harbour when it will quite literally light up as Cleavdon based Firemagic (UK) start the fireworks.

The vivid imaginations of every lad of a certain age will fill with dreams of pirates and buried treasure as the harbour will be populated by ships of all sizes including the tall ships we all associate with Long John Silver and Black Beard. Meanwhile, Queen Square, will again be hugely popular as some of the UK’s best entertainers take the stage with a special guest appearance of local group Pigbag, famed for their much sampled ”papa’s got a brand new Pigbag”, as well as the hugely popular continental foodstuffs market, giving locals a taste of traditional foods and curios from across Europe.

This annual event, entering its 42nd year, which grows in size year after year, promises to be the most spectacular to date, as the weather is expected to stay as it is for the festival weekend. As always we recommend travelling to the event by public transport if possible as parking spaces will be in short supply and if anyone is going along, we would love to see some of the pics or video footage.

WHAT: Planet CoasterWHY: A fantastic theme park and firework simulator.WHEN: Out now.WHERE: Most gaming platforms.COS...
Read More
Filed in: bristol, Bristol Harbour Festival, Fireworks, fireworks display
Share:
Find us on Facebook Find us on Twitter Find us on Pinterest Find us on Instagram Find us on Tumblr Find us on Vimeo Find us on Youtube Find us on LinkedIn Find us on Flickr
Previous article AUTUMN LIGHTS RETURNS!