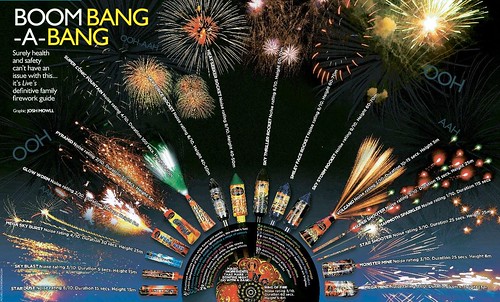 Here at Epic, we are used to answering the odd query or two from the press but we could not resist the offer to contribute to a feature in The Mail On Sunday’s Live Magazine when they wanted to feature some smaller low noise fountains and wheels and some louder rockets.

Used to the publication world nowadays with previous pieces in Men's Health and Front Magazines we collated the information required and spend a day or two setting off the items which were to appear to provide information pertaining to the noise rating, duration in respect of the fountains and mines, and the height the effects would reach. A task, I know, been ‘forced’ to fire off lots of fireworks and rockets in the name of research but hey, someone has to do it.

They also detail the chemicals and all the other ‘magic ingredients’ that create the colours, stars, sparkles and glitter to name but a few.

The piece was written primarily in an attempt to outline that in these days of Health and Safety, providing you are responsible and treat the fireworks with the respect they deserve as when all said and done, they are explosives, you are able to enjoy fireworks and actually use them to teach children about chemical reactions and the effects that can be produced following the combination of them.

Some of Epics favourite rockets made the shortlist and appeared in the feature. Check out the videos for the superb Sky Thriller, Sky Force and Smiley Face rockets.

The majority of the other pieces featured, form part of our family/garden display range and the packs start from just £3.24 for the Super Star box, The Aerial at £9.00 and the Party Time selection box at just £16.20. The selection boxes are only available from our showroom in Sheffield but at these prices, what are you waiting for?

Organised as a free event by the Mayor of London, this festival which takes place in Trafalgar Square is sure to be a...
Read More
Filed in: Epic Fireworks, mail on sunday
Share:
Find us on Facebook Find us on Twitter Find us on Pinterest Find us on Instagram Find us on Tumblr Find us on Vimeo Find us on Youtube Find us on LinkedIn Find us on Flickr
Previous article TAMWORTH FIREWORK DISPLAY BACK WITH A BANG