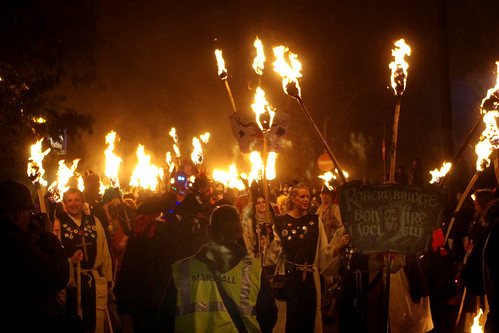 Need more fireworks to get you through the lonely months ahead? Get yourself along to Sussex where the Bonfire Night celebrations take on a whole new meaning.

Over the whole of the Bonfire season, there have been any number of Bonfire Societies from across the East Sussex region all holding their own very special events which are not the usual run of the mill light the bonfire and a few fireworks and job done, these people spend all year fundraising and planning the event to the last detail.

The costumes alone take months to make and the effigies for the Bonfire are generally in the form of some celebrity or a member of the church or in the public eye for one or another misdemeanor which of course have to be created from scratch.

Whilst many of the events take place on the 5th November, due to the massive number of Bonfire Societies in the region there are gatherings from early September. For example, Uckfield always holds their event on the first Saturday of September.

Societies are split into two main types with some being classed as ‘carnival’ which are suitable for all the family and have fairground attractions, fireworks, and musical entertainment as well as the obligatory bonfire and then there are the ‘bonfire’ types. Now, these occasions are a completely different kettle of fish as the saying goes and are exclusively adult only affairs (often ticket only events) with adult-themed entertainment, lots of drinking and more than a little debauchery.

This Saturday sees the Robertsbridge Bonfire Night celebrations take off in style. The party gets started at around 6:30pm - 7:00pm with a torchlight Procession through the streets of this quaint late 12th-century village starting from Station Road and ending at the Recreation Grounds where the massive bonfire will be lit. This year’s effigy will be a secret until mid-afternoon tomorrow before taking pride of place in the parade until it reaches its fiery end of the Bonfire. Keep your eyes peeled as most of the other societies in the area may send some representatives along to fly the flag for them but the Robertsbridge Bonfire Society members generally are the ones dressed as monks in a hark back to the origins of the town which was said to have been established by the Abbot of the local Cistercian Abbey which was given the name of Robertsbridge when it became a market town in 1198.

The fabulous Bonfire and the fireworks will get underway at around 8:30pm but although this is a marvellous event, you should also note that you have to note that the parade, in particular, is not for the faint-hearted as they drag burning tar barrels along the street and the ‘torches’ are not the type with batteries so those with very small children in pram’s or pushchairs should avoid the area.