There is one thing that Spain is renowned for around the World – feast days or fiestas for their Saints. Firework display events have been a feature in Blanes for over 125 years, only being interrupted between 1936 and 1944 due to Civil War, and always incorporates the celebrations for the Patron Saint of Blanes; Santa Anna. This year is a bit of a change from the ‘norm’ as historically, the events usually run over the weekend but this time, they are a Monday to Friday event.

The fireworks are launched from the beautiful Sa Palomera, a rocky outcrop that separates the two magnificent beaches of Blanes to the delight of the crowds which have risen from around 50 thousand to a magical 250,000 for last year’s Saturday Night event. 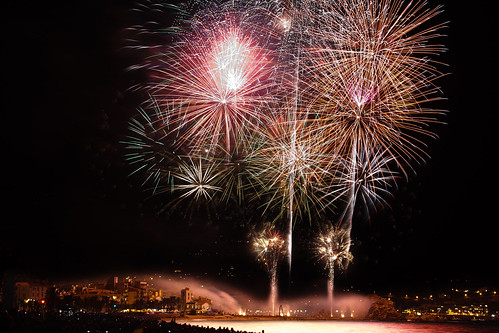 The fireworks displays have to include both aerial and aquatic making use of the beautiful waters surrounding Sa Palomera. The teams are tasked with creating a show funded by the local government. Each team has €19,000.00 to cover the cost of the pyro and there will be 5 competing teams across the event. The display should last between 20 and 24 minutes maximum but if the display fails to meet the timings, teams will be penalised. The competitors will be marked on the dark sky, whether the fireworks reflect the natural beauty of the area and all must be biodegradable. The displays must include signs with ‘Blanes 2018’ and ‘Gloria A Santa Anna’. The judging panel is made up of 40 residents of Blanes and the surrounding area. Last year’s winners, Pirotecnia Hermanon Ferrandez from Murcia who will be taking part in this year’s event as part of the prize from last year.

The winner of the overall competition will pick up €6000.00 and the runner-up will pick up €2000.00. The winner will also be given the opportunity to fire a display at the 2018 St Narcis and the Santa Cristina (Lloret de Mar) Festivals. They will be judged on:

Blanes is a beautiful Town and is known locally as the gateway to the Costa Brava on the wild Catalonian coast and the weather is always mild with an average of 73 – 84 degrees F and nine superb hours of sunshine daily.

There are plenty of other activities to partake of in and around Blanes including the medieval beauty of Tossa de Mar with its walled old town. Having been fortunate enough to visit the area, the food is absolutely first rate and inexpensive too. Go for some tapas in the old town – we found a gem of a tapas bar which had Rioja at 60 cents a glass (that’s around 55p!) and as English is not their first language lots of gracias and pointing usually comes in handy.

A little further up the coast is Lloret de Mar with its spotlessly clean blue flag beaches which fall gently into the Mediterranean and local water parks are a must. There are boat trips daily, scuba, kite surfing so loads to do when you are not recovering from the hellish red wine hangover or filling your face with the magnificent seafood on offer.

If you are over there holidaying in the Costa Brava, get along and take in one of the nights on offer with the magic of gunpowder filling the skies over this beautiful part of Spain with light and colour.