The 2016 Blackpool World Firework Championships get under way on 9th September with the first of three competing teams taking it to the skies over the Irish Sea.

First competed for in 1999, the competition continues to grow in size along with the support it receives from the general public, it has certainly positioned itself as one of the best FREE display events in the UK today.

The firework displays take part each Friday from 9th in competition format and the finale will be UK-based company Titanium Fireworks who will entertain the crowds whilst the winners are announced.

New for this year, there will be a 3D show projected onto the front of the famous Tower building. The event also takes place during the town’s busiest time – BLACKPOOL ILLUMINATIONS so you have two reasons to pop over and enjoy the free family fun and entertainment on offer.

If you do have smaller children, why not make a weekend of it and take them along to the Wild West Diner where they can eat ‘cowboy and western themed’ style and the menu (including breakfast items like pancakes and eggs all day) will have something to suit even the fussiest of eaters. Alternatively, there are some family themed bars/restaurants along the sea front facing the fireworks.

Of course, the entertainment includes the usual amusements etc but you could also visit the sea-life centre or the zoo. 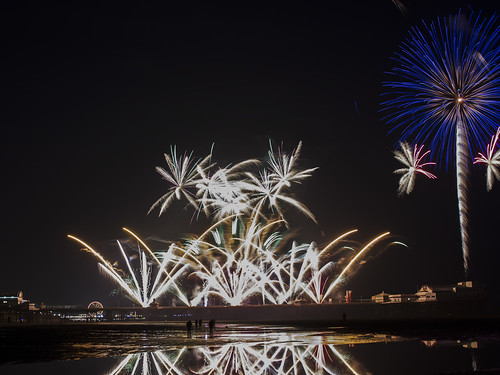 Competing team at this year’s event are as follows:

Established in 1999 Skylighter Fireworks have carried out some of the most prestigious work on the Southern Continent and continued to expand until last year, when Fireworx by Ian Riedel merged with them to create Skylighter Fireworx.

The team have competed on every continent and continue to hone their skills on the World stage with an appearance here at Blackpool. This year, they have competed in Courcheval and at Ignis Brunensis as well as the International Festival of Dancing Fireworks where they narrowly missed out to the team from Pyrotex Fireworx from Derby.

The last team in the competition hail from Cincinnati in the USA. One of the original ‘Italian Firework Families’ they have been in the pyro business since before they moved to Cincinnati in 1895 (yes, 120 years!!). They have of course over the years performed throughout the states and many other countries and continents beyond.

Once all three teams have shown their wares, the finale will take place on September 30th when Titanium Fireworks take to the skies whilst the winner is announced.

WHAT: Las Fallas De Valencia 2023WHY: Celebration of St Joseph and his efforts to protect the Royal FamilyWHEN: March...
Read More
Filed in: 2016, Blackpool, Blackpool Fireworks, World Firework Championships
Share:
Find us on Facebook Find us on Twitter Find us on Pinterest Find us on Instagram Find us on Tumblr Find us on Vimeo Find us on Youtube Find us on LinkedIn Find us on Flickr
Previous article TONEGAWA FIREWORKS FESTIVAL 2022