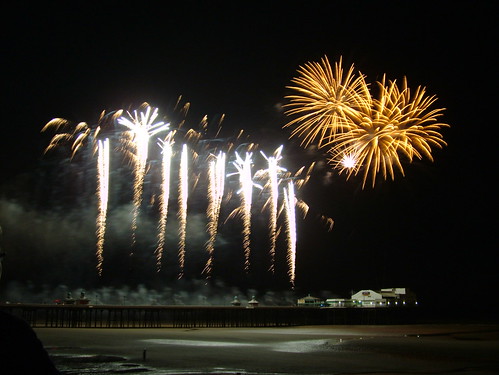 BLACKPOOL'S fabulous fireworks competition is set to be rolled into one explosive weekend.

A new format will see this autumn's popular festival staged three nights in a row rather than over five different weekends.

There is also a new location, with fireworks being set off from the beach between Central and South Piers – rather than from North Pier – where there is space for spectators to gather and enjoy the show.

The pyrotechnic displays, on September 10, 11 and 12 – a week after the Illuminations are switched on – will be billed as a Champion of Champions extravaganza featuring winners from previous festivals.

Previously held over five weekends, the new format now allows tourism businesses in the resort to package the whole weekend.

The aim is not only to bring visitors into town but to persuade them to extend their usual stay for fireworks from a drive-in visit to a bumper weekend of fireworks, Illuminations and attractions, as well as spending money in shops, restaurants and bars.

Coun Maxine Callow, Blackpool Council's cabinet member for regeneration and tourism, said: "This is set to be a fantastic weekend and offers a great opportunity to take an extended weekend break and enjoy our northern lights as the fireworks and illuminations take centre stage."

The event will gather together the world's firework elite and promises a mouth-watering series of shows with jaw-dropping entertainment for all the family. It's also the weekend that the Tour of Britain is in town – so there's a whole host of great reasons to visit Blackpool – by day and by night.

Click here for info on the 2009 Blackpool fireworks competition.

FACT: Japan produces some of the world's biggest and best fireworks, including record-breaking monster-sized shells l...
Read More
Filed in: 2010, Blackpool, Fireworks, fireworks competition
Share:
Find us on Facebook Find us on Twitter Find us on Pinterest Find us on Instagram Find us on Tumblr Find us on Vimeo Find us on Youtube Find us on LinkedIn Find us on Flickr
Previous article BUYING FIREWORKS AS A GIFT