Residents of a small town in Washington USA are divided on whether they love or hate this new idea. Bikini-Clad Babes selling fireworks in "Nearly Naked Fireworks" stand.

Business owner Rikk Martin said he decided to open the stand this year after the incredible success of coffee stands that employ bikini baristas.

“It seems like it sells coffee – it should sell fireworks,” Martin said. He said he thinks people who are upset about the business are simply overreacting. “You see girls dressed as scantily clad as mine at any park you go to,” Martin said. “It’s nothing obscene.”

Outside the stand on Wednesday, one bikini-clad employee stood on the street corner holding a sign that read, “Discount Fireworks.” A few cars honked at her as they drove past. 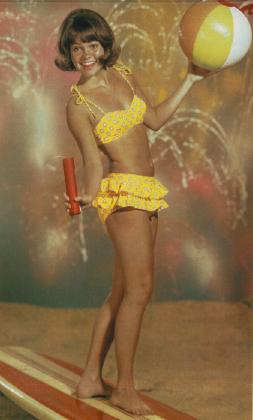 A sign inside the fireworks tent read, “Don’t be afraid to stare... That’s what they're here for [sic].”

One employee, 26-year-old Tiffany Shull, said she was happy to work in a bikini to beat the heat. “On a day like this, you don’t want to be all geared up,” said Shull, who has an 8-year-old son and studies radiology at Tacoma Community College. “It’s very nice to wear this instead of sweats and a tank.”

Pierce said enough citizen complaints could cause the company to reconsider whether to approve a lease agreement with Nearly Naked Fireworks next year. “Any time you get people who are concerned, we take it seriously,” Pierce said.

As of Wednesday afternoon, a total of 17 people had contacted Puyallup city officials to complain about the bikini fireworks stand. One resident, Annie Starwich Claeys, said the main issue is the stand’s close proximity to Grayland Park, a popular destination for parents and their kids.
The park is less than a block away from the fireworks stand, which occupies part of a Walt’s Auto Care Center parking lot.

The sign for the business – which reads “Nearly Naked Fireworks” in block letters, flanked by female silhouettes – is particularly offensive, Claeys said. “We have lots of young families with young children who are walking past that every day to go to the park,” said Claeys, who has three children under 16. “I just don’t think it’s appropriate by a grade school or a park. It’s just tacky.”

Puyallup City Manager Gary McLean said city officials aren’t wild about having the bikini fireworks stand on Meridian, the city’s main thoroughfare. But there aren’t any laws under which the city can regulate the stand or its attention-grabbing sign, he said.

“Simply put, nudity is prohibited, but wearing a bikini is not,” McLean said.

“Local governments are not allowed to regulate speech in the private sector, so we can’t censor the name.”

This is a debate that is likely to rage on but to cover the main points. Nobody is breaking the law, there is nothing the kids won't see at the beach or at a park in July. And it is summer, why not let the girls dress comfortably if they wish? Of course, working in an office full of menfolk it is hard to get an unbiased opinion on this one.

The feel at the Epic Fireworks office is, in short, wayhey! If only it were a little warmer around Guy Fawkes Night we might see the same here in Britain.... Perhaps not.