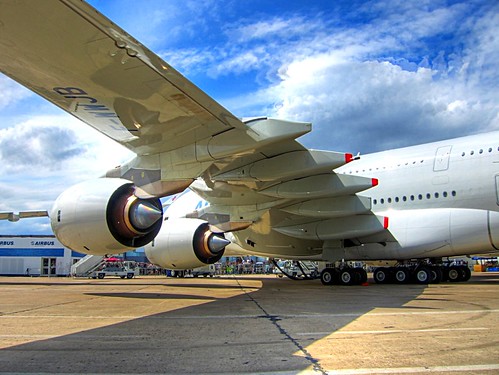 The world’s largest commercial airliner, the 525-seat Airbus A380, is scheduled to make its first visit to Northern Ireland at the NI International Airshow in Portrush this Saturday.

The sensational aircraft is just the latest addition to an outstanding line-up for the free weekend show, organised by Coleraine Borough Council in association with the Kennedy Group.

Although the Airbus had touched down in the Republic of Ireland a few years ago this will be Ireland’s first “flying display” where the pilot will perform manoeuvres not normally seen in commercial flying.

The unique appearance will be a huge draw to the award-winning event, which also features the Red Arrows and Eurofighter Typhoon on both days.

Not only will there be giants in the sky but also on the water with the first visit to Northern Ireland of RFA Largs Bay, a 180 metre Royal Navy support ship – that’s one and a half times bigger than the HSS ferry. The ship will act as a platform for a Royal Marines Commando beach landing involving landing craft and Sea King helicopters.

Organisers have been careful to include a wide range of aircraft from a World War 2 Spitfire, carbon-fibre stunt planes, cold war jets, a Vietnam War helicopter, right up to the latest RAF fighters.

There will be over 20 air displays and a full programme of ground shows with gates opening at 11am each day. Saturday evening will also see Portrush biggest fireworks display for many years.

Organised as a free event by the Mayor of London, this festival which takes place in Trafalgar Square is sure to be a...
Read More
Filed in: Airbus A380, biggest firework, Epic Fireworks, fireworks display
Share:
Find us on Facebook Find us on Twitter Find us on Pinterest Find us on Instagram Find us on Tumblr Find us on Vimeo Find us on Youtube Find us on LinkedIn Find us on Flickr
Previous article BLACKPOOL WORLD FIREWORKS CHAMPIONSHIP