One of the favourite places for the teams who have fired in the Firework Champions Events, Belvoir Castle once again offers the stunning grounds of this Regency period stately home.
The translation for Belvoir (pronounced beaver) is unsurprising; beautiful view and the Castle and Gardens are home to the current 11th Duke and Duchess of Rutland and this stunning estate has been home to the family for over a thousand years.

The current castle is the fourth to grace the lands here since Norman times and was the work of the architect James Wyatt until his death in 1813 when the Reverend T Thornton took up the reigns until completion. The original house had been badly damaged during the War of the Roses, the English Civil War and finally a devastating fire.

The Castle is in the gothic revival style and it remains as impressive today as it has ever been positioned on the hill overlooking the lands belonging to the Duke. It also houses one of the greatest art collections in the world today with pieces from Poussin, Durer, Rubens, Stubbs and Gainsborough. In fact, one of the paintings of the seven sacraments by Poussin titled ‘Ordination’ was bought by a US art museum in 2010 for a staggering $24 million. 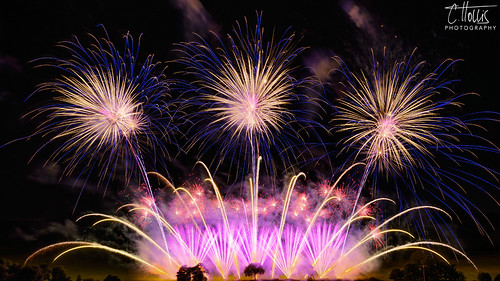 The Castle and Gardens will not be open to the public when the event takes place but this will, of course, leave the visitors to enjoy their picnic and of course beautiful pyrotechnics in the grounds below the castle.

The teams competing this year in the Firework Champions Events here at Belvoir are as follows:

FUSION FIREWORKS
The team have been in the business for 10 years and hold an extensive list of clients for both private and corporate events as well as a smattering of football clubs and wedding celebrations. Little is known about this team as they do not appear to have had much time to compete, but I am sure that being in this position is to their advantage as the others do not know what to expect. Good luck to Fusion Fireworks.

FLASHPOINT FIREWORKS
Established in 2003 this display team has been at the forefront of corporate events for many years and they are able to count some of the UK’s biggest Blue-Chip companies amongst their clientele alongside local government contracts and hundreds of private displays annually. The team have competed at Eastnor Castle and Newby Hall for Firework Champions in the past with a win at Eastnor in 2009 and they went onto win the British Musical Firework Championships the same year. We expect great things from them so keep your eyes peeled for what this team brings to the table. Good luck Flashpoint Fireworks

OPTIMUM FIREWORKS
Phil and Rebecca Cooper are friends of the team here at Epic so of course, they have a place very close to our hearts. The husband and wife team started crewing for other teams back in 1997 and finally took a chance and set up independently in 2010 and have never looked back. They were winners at Broughton Hall Firework Champions event and last year they fired at Arley Hall FWC.
Known for beat perfect rhythmic displays they will certainly be out for glory – bring it on!

Good luck to all the competitors

Mine cakes are a harder to find, seldom seen, firework which unlike traditional mines are made up of multiple tubes a...
Read More
Filed in: Belvoir Castle
Share:
Find us on Facebook Find us on Twitter Find us on Pinterest Find us on Instagram Find us on Tumblr Find us on Vimeo Find us on Youtube Find us on LinkedIn Find us on Flickr
Previous article AUTUMN LIGHTS RETURNS!