Bastille Day, Frances most important national holiday, commemorates the storming of the Bastille, which took place on 14 July 1789 and marked the beginning of the French Revolution. The Bastille was a prison and was seen as a symbol of the absolute and arbitrary power of Louis the 16th's Ancient Regime. By capturing this symbol, the people warned France that the king's power was no longer absolute: they thought power should be shared by the Nation and be limited by a separation of powers.

Although the Bastille only held seven prisoners at the time of its capture, the storming of the prison was a symbol of liberty and the fight against oppression for all French citizens; like the Tricolore, the French national flag, it symbolized the Republic's three main ideas: Liberty, Equality, and Fraternity for all the people of France. It signified the end of absolute monarchy, the birth of the sovereign Nation, and, ultimately, the formation of the (First) Republic, in 1792. 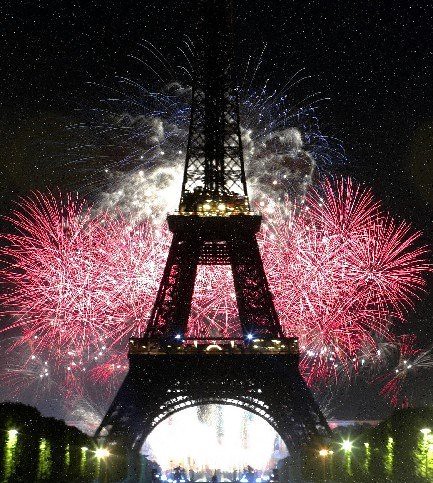 Bastille Day was officially declared a national holiday on 6 July 1880 when the new Republic was firmly established. Bastille Day is very important for the French as it symbolizes the birth of the Republic. As in the US, where the signing of the Declaration of Independence heralded the start of the American Revolution, in France, the storming of the Bastille began the Great Revolution. In both countries, the national holiday thus symbolises the beginning of a new form of government.

On the one year anniversary of the fall of the Bastille, delegates from every region of France proclaimed their allegiance to a single national community during the Fête de la Fédération in Paris - the first time in history that a people had claimed their right to self-determination.

There are nationwide celebrations every July the 14th but some of the biggest in the country take place in Paris along the famous Champs-Elysees. Thousands of spectators turn out to watch the procession and military bands as they make their way along the tree-lined avenue. After dark, raucous parties, the famous fireman’s ball - where members of the public are invited to attend in every fire station in the city - and huge fireworks display light up the night.

With a backdrop of the world-famous Eiffel Tower, the fireworks are certainly spectacular, the Tower itself is often rigged and massive jets of flame shoot from all sides as aerial shells burst high above to wow the cheering crowds. The French do everything with a sense of style and Bastille Day is their time to celebrate liberty, equality and fraternity with a healthy dose of pomp and ceremony. Viva La France ! and Viva Le Fireworks !

Thanks to constant improvements in firework manufacturing, and a thirst from importers to deliver the most impressive...
Read More
Filed in: Bastille, Bastille Day, Fireworks, france, French Revolution
Share:
Find us on Facebook Find us on Twitter Find us on Pinterest Find us on Instagram Find us on Tumblr Find us on Vimeo Find us on Youtube Find us on LinkedIn Find us on Flickr
Previous article SOUTHEND’S FIREWORK DISPLAY IS TO MAKE A COMEBACK THIS YEAR!