Since moving to Barnsley from Batley some 3 seasons ago, we have been introduced to the marked differences between the folk of West and South Yorkshire and have been made most welcome.

The staff of Barnsley Chronicle came along to see us in the midst of one of our maddest of days on the run-up to the 5th to see what we were all about.

They have written a feature about Jimmy Singh (the owner) and Paul (his son) and their transition to South Yorkshire. All in all, it has been a smooth move and judging by the company’s growth, long may it continue.

Jimmy has been in the fireworks industry for over 25 years and he started out as most do, selling fireworks in his own small convenience store. Then, as the call for fireworks increased, he made the first move to concentrate on pyro exclusively and the story began. Moving to Batley was a great idea and was where the real pyro passion started as they introduced 1.3g fireworks, which are the most powerful consumer display fireworks available in the UK. The business eventually outgrew its surroundings and eventually, new premises had to be located.

The search went on for some-time until they came across land positioned a couple of doors away from the local fire station with enough space to have a bespoke showroom, secure packing shed and areas for large containers (to eventually be replaced by solid structures to contain all the fireworks) and the Epic journey continued.

Epic are proud to be the stockists of the biggest selection of 1.3g barrages (fireworks which you light once but have multiple effects) and 1.3g BIG rockets in the UK’s largest bespoke showroom.

Supplying from Cornwall to Scotland has its challenges, not least of all the transportation of fireworks but we have customers who continue to visit us from all over the UK.

As proud suppliers to Scout Groups, Village Associations, pubs and all manner of different Clubs up and down the Country, we are always on hand to offer advice and assistance for those who need it.

If you want to read more of the article, pick up a copy of this weeks Chronicle.

So, if you need fireworks for any event, whether it’s a special anniversary or birthday, a wedding or New Year’s Eve, get yourself over to us in Tankersley. We are just off the A61 at Wentworth Business Park (the road that runs around behind Mickey D’s) and we are sure to have something which will suit your needs.

Come along, we are a really friendly bunch and only too happy to help. 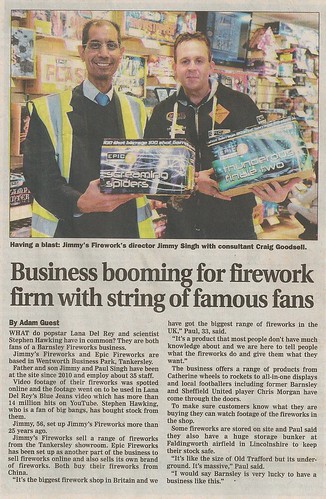 Since the discovery by a monk in China almost a thousand years ago fireworks continue to thrill and astonish young an...
Read More
Filed in: Barnsley Chronicle, Epic Fireworks, Features, jimmys fireworks, South Yorkshire
Share:
Find us on Facebook Find us on Twitter Find us on Pinterest Find us on Instagram Find us on Tumblr Find us on Vimeo Find us on Youtube Find us on LinkedIn Find us on Flickr
Previous article CAI GUO-QIANG VR FIREWORK ARTWORK