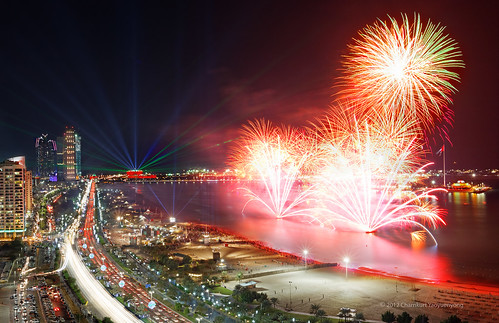 This year will see the region of Abu Dhabi celebrating the 42nd National Day.

They will hold a total of 11 shows across 6 sites around the City but there will be two MEGA 12-minute displays held on the 1st and 2nd December with a whole host of other activities which are designed to engage both local residents and visitors alike.

They will fire a total of 63,410 fireworks in total and the event is being put fired by Spanish fireworks specialist Angel Gonzalez from Pirotecnia Igual, who also was responsible for the massive celebration fireworks in front of a live audience of 2 million with many tens of millions more watching the event on TV.

Other activities to be held at The Corniche include an acrobatic show and thousands of cars decorated in the colours of the United Arab Emirate’s national flag in a bid for entry to the Guinness Book of World Records.

There will also be lots of market stalls, selling leather goods and handicrafts from all over the region as well as entertainment including live musical performances, dance and craft-making activities.

WHAT: Beppu Fireworks Festival – The Art of Light and MusicWHERE: Beppu Spa Beach, JapanWHEN: Late July 2023COST: Fre...
Read More
Filed in: 2013, abu dhabi, Corniche, Fireworks, fireworks display, Guinness World Records, National Day, Pirotecnia Igual, United Arab Emirate
Share:
Find us on Facebook Find us on Twitter Find us on Pinterest Find us on Instagram Find us on Tumblr Find us on Vimeo Find us on Youtube Find us on LinkedIn Find us on Flickr
Previous article SOUTHEND’S FIREWORK DISPLAY IS TO MAKE A COMEBACK THIS YEAR!