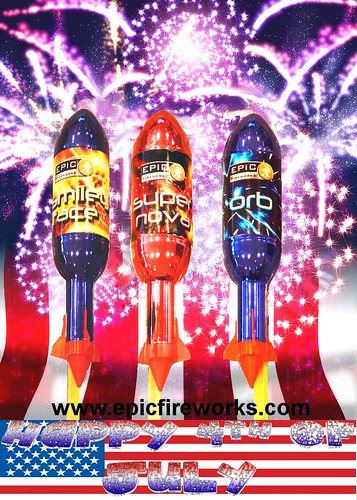 Its just 15-days to go until the USA celebrates in style for the fourth of July. Independence day has been celebrated in one form or another since 4th July 1776 when the second meeting of the Continental Congress signed the final draft of the Declaration of Independence.

Following the signing of this historic document, patriots cheered and celebrated but it wasn't until 1777 that bells rang, guns were fired, candles were lit and fireworks started their journey through the ages, not synonymous with 4th July everywhere.

Unfortunately, the War of Independence dragged on, stifling some of the celebrations but in 1783, the war ended leaving the way open for the speeches, military parades and fireworks to take place.

In 1941, Congress declared 4th July as a National Holiday.

Nowadays, the party atmosphere is a little less austere and based upon families having the opportunity to spend time together taking part in some of the more traditional pastimes like; pageants, picnics, baseball games, watermelon eating competitions, trips to the beach etc. The food on offer will traditionally include hot-dogs, hamburgers, corn on the cob, apple pie, coleslaw and salad and the occasional clam-bake.

Historic towns like Boston (tea-party) and Philadelphia (where the signing of the Declaration of Independence took place) are set to host some of the Country’s best and more family-focused events.

The Boston Pops Orchestra holds a televised concert on the banks of the Charles River, featuring American music from across the ages ending with the 1812 overture written by Tchaikovsky. Performances from Jennifer Hudson, The Roots, Queen Latifah, Daryll Hall and more. The night will be rounded off with an incredible fireworks finale over Philadelphia’s Museum of Art.

Over in Philadelphia, the night will be lit up with a spectacular fireworks show set to Sesame Street music making the Independence Day fireworks truly memorable. The fireworks will be lit immediately following the neighbourhood street party parade at around 9:00pm.

All across Philly, there are events taking place including a number of music concerts, the one to take place on 4th July to be the biggest of them, which is the largest outdoor concert in the USA.

So, wherever you are celebrating in the US or here in good old Blighty, we can help you to celebrate your country’s independence in style with top of the range fireworks which will wow your family and friends.

Open 7-days a week (except Christmas, Boxing and New Years Day) we will be only too happy to help. With on-site fully trained specialists and more than 20 years experience, we have something to suit every pocket and every taste.

Mine cakes are a harder to find, seldom seen, firework which unlike traditional mines are made up of multiple tubes a...
Read More
Filed in: 4th July Celebrations, Fireworks, Independence Day
Share:
Find us on Facebook Find us on Twitter Find us on Pinterest Find us on Instagram Find us on Tumblr Find us on Vimeo Find us on Youtube Find us on LinkedIn Find us on Flickr
Previous article SOUTHEND’S FIREWORK DISPLAY IS TO MAKE A COMEBACK THIS YEAR!