For some louder will always be better and for 2021 the inclusion of Klasek Fireworks brings with it an arsenal of louder barrages! Although we have listed our top 5 nosiest fireworks before, our new Klasek items have really raised the stakes with regard to volume and therefore noise-lovers are in for a treat during their next visit to Epic!

2. Pyrotechnology 253 Shot - Noise Rating 9/10 - 100 Seconds - Cost £299.99
Klasek's 253 shot compound cake is an absolute monster and conceals a full 4 kilos of explosive content, the maximum allowed within a firework of this type. Its goliath powder weight is put to superb use and after cycling through 26 different effects, and a myriad of firing patterns, 30 loud whistling serpents Z-fire 10 wide. For its finale, a salvo of titanium salutes launch at once and overlapping bursts give thunderclap that radiates deep booming and loud echoing.
3. Dum Bum 25 Shot - Noise Rating 10/10 - 25 Seconds - Cost £34.99
The Dum Bum range needs little introduction and is famous for providing the very loudest fireworks in the UK. This 25 shot cake features maximum sized 30mm inner tube diameters, and therefore you can rest assured that the noise given is full-mouthed and utterly ear-piercing.

5. Dum Bum 49 Shot - Noise Rating 10/10 - 35 Seconds - Cost £59.99
The 49 shot Dum Bum takes our top spot as not only does it give the largest number of titanium salutes, but these reports leave maximum sized bores whilst also having the highest net explosive content per tube. Results speak for themselves and intense, powerful blasts can often be felt in your chest. If you wish to end your display on a bang, then no finer firework can be found! 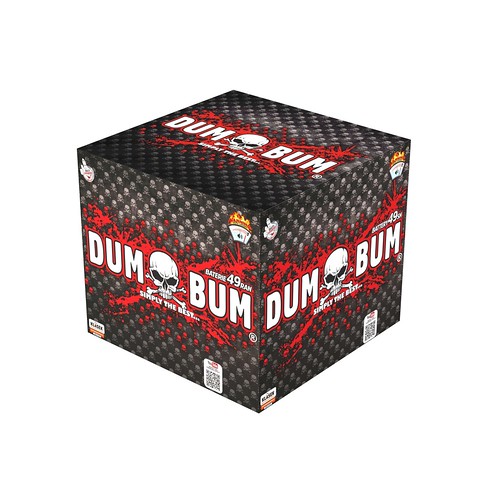 Remember that we also stock a Dum Bum noise pack for those wishing to turn the volume up to eleven! Included are 12 shot tubes, a pair of 25 shot 'Micro' barrages, a fanned Dum Bum and the 25 shot 30mm cake which ranks third in our countdown.

In honour of the country celebrating its 92nd National Day, a spectacular series of events lasting 10 days in total w...
Read More

ROUND TABLE CHARITY TO HOST HUGE FIREWORKS EVENT IN OXFORD

WHAT: Round Table Charity Fireworks DisplayWHY: Great entertainment for the whole family and for a good cause!WHERE: ...
Read More

Bonfire Night may be one of our favourite times of year, but for our fluffy friends, the 5th of November is marked on...
Read More
Filed in: LOUDEST FIREWORKS, TOP 5
Share:
Find us on Facebook Find us on Twitter Find us on Pinterest Find us on Instagram Find us on Tumblr Find us on Vimeo Find us on Youtube Find us on LinkedIn Find us on Flickr
Previous article FIREWORKS AND TECHNOLOGY