1. The Chinese use firecrackers to scare off mountain men
As early as 200 BC the Chinese were writing on green bamboo and heating it over hot coals to dry, they discovered that if left on the coals for too long the wood would expand and crack creating a bang of course. It is believed that these noises scared off the abnormally large mountain men that brought terror to the towns. But Down to this, the firecracker was born. As time progressed the fireworks were used in the same way to scare away evil spirits.

2. You can’t recycle fireworks
Due to the chemical elements in the fireworks, it isn’t a good idea to just throw them in the rubbish exploded or not. The best way to make sure that the fireworks can be disposed of safely is to soak them in water for 24-48 hours. Fireworks hate the damp, so this will render the fireworks safe to dispose of. Always check with your local waste department as they may have special disposal procedure or places for explosives just to be on the safe side.

3. China may have created the firework, but Italy gave them colour
The Chinese were the ones that created fireworks but in 1830, it was Italy who gave them their colours by burning different metallic powders. They were quick to discover that by doing this they could create different colours for example; calcium produces the colour orange, sodium makes yellow and barium makes green. One of the hardest colours to produce for a firework is blue, to get any kind of blue colour you need a copper compound and if this gets too high in temperature the blue hue gets washed out. Some of the colour goes from just lighting the firework itself. 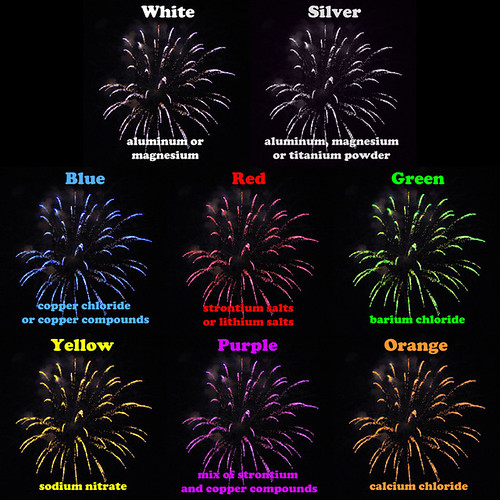 4. Fireworks were invented before weapons not the other way around
Sometime between 600 & 900 AD Chinese alchemists created fireworks by searching for a potion for immortality. They thought by mixing saltpetre (Potassium nitrate), charcoal, sulphur and other ingredients then pouring into empty bamboo shoots and adding fire they thought that this would do the job. Instead of the potion they wanted for immortality they created the firework. It took them over several hundred years to discover that using the same mixture they could use them in battle by attaching firecrackers to arrows, or using them in the gunpowder catapult.

6. Marco Polo wasn’t the 1st person to bring fireworks to Europe
As Marco Polo returned from china with fireworks in 1295, some Europeans argue that they were introduced to gunpowder weaponry a lot earlier during there crusades. China began to control the flow of gunpowder to its neighbours as they thought doing this would leave them with more themselves in case of conflict. But despite China's efforts, gunpowder spread through the silk road to the Middle East, giving them the opportunity to create and use gunpowder weaponry during their crusades.

7. Sparklers burn a greater temperature than a blowtorch
Sparklers may be one of the most fun and pretty of pyrotechnics but they can burn from anywhere from 1800-3000 degrees Fahrenheit. Therefore, they are recommended to be used with gloved hands and lit and used one at a time. Small but mighty.

8. Boom, Crackle, Hiss Some fireworks come with sounds
It is layers upon layers of organic salt, combined with the oxidizer potassium perchlorate that is burnt a layer at a time slowly that releases a gas that gives the whistling sound that is in most fireworks. To create hissing or sizzling sparkles aluminium or iron flakes are added, while titanium powder is used to create the loud bangs in addition to white sparks. Add them all together and you have one very noisy explosive indeed.

9. Americans have been celebrating their independence with fireworks since 1777
The very first Independence Day celebrations that involved fireworks was on July 4th, 1777 in Philadelphia. They put together a day of elaborate activities and celebrations which included a 13-cannon display, a parade, fancy dress, music, musket salutes and of course the main attraction fireworks. 13 Rockets were set alight on the commons lighting up the city below marking the memorable day, and this has now been the case ever since. All around most the US they now celebrate the day of independence with fireworks the only places that cannot do this due to them still been banned are New Jersey, Massachusetts and Delaware.

10. Elizabeth, I & King James II were pyro lovers
Both Queen Elizabeth I and king James II were both fireworks lovers. So much so that Elizabeth created a court position called the ‘fire master of England’ she granted this title to the best and most respected fireworks-maker in England. Also, King James knighted the man who did the fireworks display at his coronation.

WHAT: La Merce Festival 2023WHY: Celebration of Barcelona’s patron saintWHEN: 21st – 26th September 2023WHERE: Barcel...
Read More
Filed in: FIREWORKS. FIREWORK FACTS, FUN FACTS, £10
Share:
Find us on Facebook Find us on Twitter Find us on Pinterest Find us on Instagram Find us on Tumblr Find us on Vimeo Find us on Youtube Find us on LinkedIn Find us on Flickr
Previous article SOUTHEND’S FIREWORK DISPLAY IS TO MAKE A COMEBACK THIS YEAR!