We are frequently asked a question more than any other; ‘what is the difference between 1.4g and 1.3g fireworks?’ Now, this is where it begins to get a little more complex. Up until 2017, all fireworks in the UK were classified under British Standard (BS) and everyone learned over the years what each of the different classes included and meant in relation to pyrotechnics.

1.3g is the more hazardous and they will contain more explosive power than 1.4g fireworks – this can be up to 5 times more powerful.

You can always tell if a firework is 1.3G or 1.4G by the CLP on the firework itself: 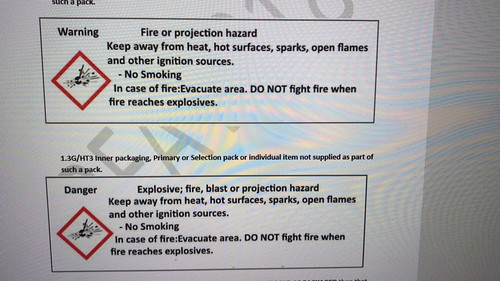 Today, the new CE standards are EU wide but there are still certain products that despite being permitted under European Law, our Health and Safety Executive decided to maintain the ban on some old favorites like aerial shells, bangers, screech rockets and of course air bombs.

Under CE the new classes are:

Although it is not always as apparent as some may think if you check into some of last year’s products with the 1.4g label like the 90 shot Aquarius barrage from Black Cat fireworks which is pretty, loud and at 6 kilos not a lightweight and contains 0.8 kilos of flash powder but is still classified as requiring a 25m safety distance because it is over 500g in NEC. However, when it comes to rockets, there is a huge difference and we would recommend 1.3g for decent effect rockets.

Today, due mainly to the changes implemented, the maximum NEC on any single barrage is 1 kilo but this rule does not apply to compound cakes which are viewed as a number of smaller cakes which are fused together.

If you are in doubt or need any assistance, please do not hesitate to get in touch as we will be only too happy to help.

A hidden gem of a game is available on Steam for PC. If you are a fan of Pyro, and want to put on crazy, funny, intri...
Read More
Filed in: 1.3g, 1.3G VS 1.4G FIREWORKS, 1.4G, Fireworks
Share:
Find us on Facebook Find us on Twitter Find us on Pinterest Find us on Instagram Find us on Tumblr Find us on Vimeo Find us on Youtube Find us on LinkedIn Find us on Flickr
Previous article INSTANTLY LIGHTING OVER 10 KILOS OF EPIC FIREWORKS