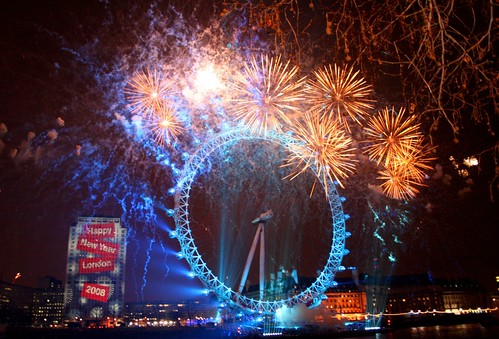 As usual, the midnight fireworks display will be broadcast live on BBC One. Music in the build-up to midnight will be mixed live by Radio 1's Nihal.

The display will mark the London Eye's tenth birthday, and the tenth anniversary of the infamous 'river of fire' display on the Thames that left so many Millennium revellers disappointed.

"London will bring in 2010 with a bang, a glittering explosion across the midnight sky," says Boris Johnson.

"We want to show to the world that we are looking forward to the future with the optimism and energy that characterises our capital and makes it the most exciting city on earth.

"The fireworks are part of a dazzling range of attractions all across the capital over the festive season.

"For visitors and Londoners alike, there is something for everyone, from Christmas trees and sparkling lights, to carol concerts and ice-skating at iconic locations."

New Year's Eve revellers are advised to plan ahead. Many venues, such as pubs, bars and clubs, are likely to be ticketed with advance booking required.

Space in viewing areas along the Thames to watch the fireworks will be limited.

Last year Boris Johnson suggested that access to the riverside viewing areas could be controlled by ticketing, but he has not followed through on that idea.

Tube, DLR, tram and bus services will run all night, with free travel from 11.45pm to 4.30am. In central London, Tube travellers should look out for station closures and exit only arrangements.

Many roads in the centre will be closed to cars and buses.

Judy Chicago is an American artist, art educator, and writer, and is highly considered a first-generation feminist ar...
Read More
Filed in: Fireworks, Groupe F, London, new year
Share:
Find us on Facebook Find us on Twitter Find us on Pinterest Find us on Instagram Find us on Tumblr Find us on Vimeo Find us on Youtube Find us on LinkedIn Find us on Flickr
Previous article BUYING FIREWORKS AS A GIFT