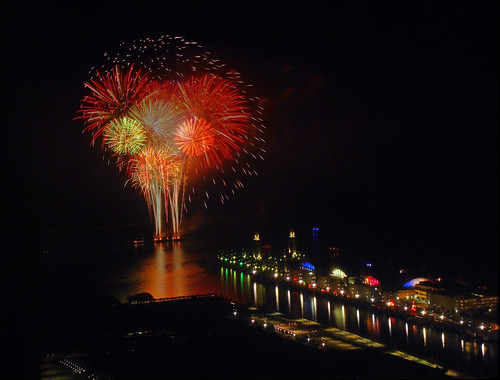 Chicago is slated to celebrate New Year's 2010 in style, and while you'll find plenty of bars and nightclubs hosting spectacular events to ring in the new year, there are also a number of family-friendly events taking place throughout the Windy City. From
the fireworks in Grant Park to the comedy showcase at ComedySportz, set your sights on any of these family-friendly New Year's Eve 2010 parties in Chicago:

New Year's Eve 2010 Events on Navy Pier
Head to the Navy Pier for fun activities and free entertainment all night long around the lake. The Navy Pier is home to several attractions that will be staying open extended hours on New Year's Eve, and you can stick around until midnight to watch the world-famous fireworks display over the water. In previous years, the Navy Pier has hosted a lakefront carnival and themed activities for young kids. Navy Pier Fun packages and tickets to the major attractions can be purchased online. The Navy Pier is located at 600 East Grand Avenue in Chicago; call (312) 791-7000 for more information.

New Year's Eve 2010 Party at Grant Park
As one of the biggest New Year's celebrations in Chicago, Grant Park lights up for a grand fireworks spectacular at 11:40 p.m. and features live music and entertainment throughout the night. Make your way to the Buckingham Fountain with the family to enjoy the festivities, but be sure to get here early to secure the best spots. Grant Park is located at 541 North Fairbanks Court in Chicago.

Get on down to Grant Park this New Years Eve for one of the best displays in the USA.

Last year being the first year since 1997 the British Fireworks Championship had to be reluctantly cancelled due to t...
Read More

FIREWORKS MARK THE END OF THE 2020 OLYMPICS

Huge fireworks lit the night sky in Tokyo, marking the end of the closing ceremony, bringing 16 brilliant days of int...
Read More
Filed in: 2010, Chicago, Fireworks, new years
Share:
Find us on Facebook Find us on Twitter Find us on Pinterest Find us on Instagram Find us on Tumblr Find us on Vimeo Find us on Youtube Find us on LinkedIn Find us on Flickr
Previous article Horse Safety Blog