Whilst the vast majority of us thoroughly enjoy Bonfire Night and in particular, fireworks, let us not underestimate the destructive power of pyro and the terrible injuries which can easily result from the mishandling of fireworks.

The video above highlights the dangers of playing with fireworks has been released by Greater Manchester Fire and Rescue Service (GMFRS) as they go on sale ahead of Bonfire Night.

Part of the annual Treacle campaign, launched this week, it shows the devastating effects an illegal firework can have when it explodes in a child’s hand.

It comes a year after an “onion bomb” (also known as a shell) detonated in the face of a 10-year-old boy in Salford leaving him with serious burns and facial injuries.

Assistant County Fire Officer and Director of Prevention, Peter O’Reilly said: “As Bonfire Night approaches we want everyone to enjoy it safely, so this video serves as a reminder to children and parents what can happen if you don’t take firework safety seriously.

“Last year everyone remembers the shocking image of a 10-year-old boy in hospital with serious injuries, he had been holding an illegal onion bomb when it exploded in his face. “This year, we hope this video, which reveals the horrors of firework injuries, will make people think twice.”

Here are some facts and figures and safety advice to ensure that you don’t end up being another statistic:

• Did you know that fireworks can reach speeds of up to 150-200 mph.
• It is illegal to sell fireworks to anyone under the age of 18 – so if you are asked for ID, please don’t be offended – it is for your benefit and ensures that fireworks are handled only by those responsible enough to do so.
• Sparklers can reach temperatures of up to 1600 degrees centigrade which is as hot as a blowtorch. Do not allow the under 5’s to handle sparklers – before you have the time to think and react, your little one could have third-degree burns on their little hands.
• Bonfire Night was originally called ‘Bone Fire’ night in reference to the burning of the carcasses of the animals slaughtered in the Summer months.
• Until as late as 1959, it was illegal to not celebrate Bonfire Night in the UK.
• Throwing fireworks is not only crassly stupid and an extremely dangerous thing to do but it could result in a fine of up to £5000.00
• Pets can become very upset over the Bonfire Night period of celebrations, which can go on for up to 10-days depending on when the actually 5th falls but if you follow a few simple rules, you can alleviate some of their distress. We at Epic Fireworks recommend that you check out the details available on the RSPCS website.
• More than half the reported injuries sustained on BFN are to children. The most common damage seen in hospitals up and down the country are to the hands and face.
• Make sure that any fireworks or sparklers purchased comply to BS7114 or CE standards as set out by the Health and Safety Executive for safety and performance (they also check to ensure that the chemicals and metals etc used comply to strictly recommended levels).
• Check the safety distance recommendations on your fireworks. They can vary from ‘garden’ fireworks which generally have a 5 metre safety distance and consumer display fireworks which have a 25 metre minimum recommended clearance distance.

Above all, whilst it is necessary to outline this information, provided you and your family follow the ‘Fireworks Code’ you will stay safe with all your fingers intact to celebrate for many more years to come.

• Only buy fireworks marked BS 7114.
• Don’t drink alcohol if setting off fireworks.
• Keep fireworks in a closed box.
• Follow the instructions on each firework.
• Light them at arm’s length, using a taper.
• Stand well back.
• Never go near a firework that has been lit. Even if it hasn’t gone off, it could still explode.
• Never put fireworks in your pocket or throw them.
• Always supervise children around fireworks.
• Light sparklers one at a time and wear gloves.
• Never give sparklers to a child under five.
• Keep pets indoors.
• Don’t let off noisy fireworks after 11pm (this does not apply at New Year.

Get children involved and make a poster about firework safety. It is much better to do this than run the risk of a lifetime of pain and skin grafts. 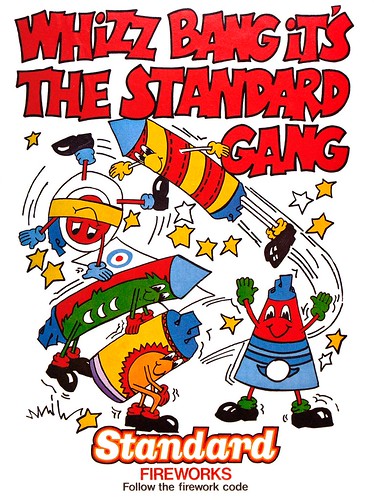 Of the thousand or so, annual firework injuries suffered annually more than 70% of them are children.

The fact of the matter is, fireworks are fascinating and little ones are bound to want to touch them. A number of infant, pre-schools and nurseries are using fun as a way to teach the little ones the huge dangers with fireworks.

My little grand-daughter Lacey has made a poster at her nursery school which has a teddy with a poorly paw which he burned on a sparkler. Although she is unlikely to be a Picasso in years to come, it is great to bring lots of little ones together to get the message across.

Each year the communities in and around Warwickshire take part in the annual competition to produce a poem and a poster about Firework Safety run by the local Trading Standards Service. The competition is designed to bring to mind the dangers of fireworks and how to avoid unnecessary injuries.

Why not get your local school to take part? The chaps in Warwickshire get a massive response and split the competition into two groups: Nursery (or pre-school), reception and years 1 and 2 and then the second group for years 3 and 4.

The tiny ones just have to do the poster where the older children have to provide a short poem or safety rhyme. The winners receive a £10.00 book token and the winning posters will be used in the 2014 campaign for Bonfire Night Safety.

Why not give it a try at your local school. A couple of £10.00 gift tokens for the bookshop and a couple of people to adjudicate the event and you are off. It keeps safety at the forefront of thinking without being too intrusive. Anyone of a certain age (and this old bird is 50 next year!) may remember a public safety film about a fire where a little dolly got all her face burned off having fallen into a fire. I can still picture that image now, forty-some years later so it just goes to show, it doesn’t have to be fussy to make an impact. 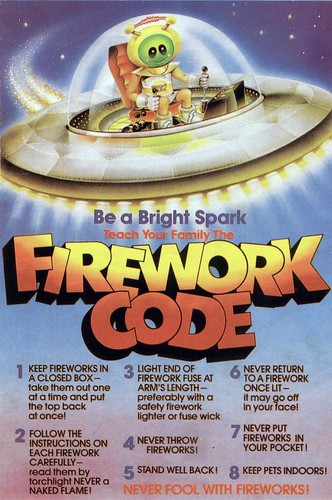 Over the years, love them or hate them, the Health and Safety Executive have definitely aided in bringing down the number of firework-related injuries over the past few years.

There is no reason why you and your family or community group cannot have a safe and beautiful display to the delight of everyone.

There are a few simple tips and recommendations to ensure that everyone has a great time this Bonfire night.

Before the event, there are a number of steps to be taken:

• Designate a firer – this may not seem important but in order to ensure that things run smoothly, there needs to be one person in charge. Make sure you have your full personal protection equipment. We would recommend a high visibility vest or jacket, safety goggles, port-fires and suitable footwear.
• Measure your site – it is absolutely no good buying all your fireworks for a 25m safety distance and finding out the site is only 17m wide! Remember to take into consideration the ‘fallout’ area for the display
• Plan for the worst – although with the necessary steps taken, there should not be an issue, make sure you have someone available to call the emergency services.
• Only buy from a reputable firework supplier. The ones that ‘fell of the back of a lorry’ probably did, resulting in damage or indeed, not meeting British Safety standards – this happens for a reason – they are tested to make sure that they are safe to use!! Make sure your fireworks are marked as BS 7114
• If your display is being provided by a professional firework company, make sure you are clear on who does what in the event of an emergency.
• Store the fireworks as instructed – this should be a cool dry place
• Inform local authority and emergency services

On the day of the event:

• Re-check the site, weather conditions and wind direction
• Don’t let anyone other than the display operator or firer into the safety area/fall out zone
• Don’t drink – alcohol and fireworks do not mix – you will need all of your wits about you
• Never attempt to re-light fireworks – leave them over-night if possible and drop them into a bucket of water to de-activate the flash/gun powder
• Mark out and plan the display area – any reputable fireworks supplier will be able to provide this for you
• Think about access to the site for the emergency services in the event of an accident
• Appoint marshals/stewards – make sure they know where the viewing public are and are not allowed to enter and what to do in the event of an emergency
• Sign-post first aid posts
• If you are near an airport – let them know

If you are in any doubt, call your local fireworks supplier – they would rather you were safe than sorry.