As we know, the Japanese are known for their action-packed events, with some of the most spectacular fireworks over the summer months. If your lucky, at some events, you may get a short glimpse of the fireworks through some of the high-rise buildings or try battle the crowds to get the perfect place to view. The Kita Hanabi is perfect for pyro lovers as it may not be as big as some of the other events, but as it is held along the flat bank of the Arakawa river it guaranteed some impressive views of the action.

Marking the 8th time for the event this year, and last years leading fireworks company “IKEVEN” will launch 8,888 fireworks into the skies above the river. The event is organised by a private organisation representing the Kita Ward along with the locals and residents of the city.

The event is free with three separate sections of seating divided up along the riverbank. If you would like a more impressive view and more of an insight into the atmosphere at a Japanese event you can purchase a seat in the following areas:

As mentioned before wherever you decide to sit to view, you will have an uninterrupted fantastic view of the fireworks setting the skies alight.

The schedule of other events

With plenty on offer throughout the evening, why not don your yukata, join the locals and enjoy this autumn pyrotechnic delight.

WHAT: RHAPSODY IN THE SKY / QUEEN SUPER FIREWORKS 2019
WHY: FIREWORKS AND ROCK MUSIC
WHEN: DATES THROUGHOUT NOVEMBER 2019
WHERE: JAPAN
COST: TICKETED EVENT

Japan is already known to put on some of the most epic firework displays throughout the summer months but in November they will go one step further with an event that will be the first of its kind in Japan. Queen super fireworks, or ‘yozora no rhapsody’, will be a tribute to a legend of the British music industry; that’s right, you guessed it is the fantastic Queen.

Japan has one of the most loyal Queen fan bases in the World and they have been supporting them ever since the band first toured over there in 1975. Queen and Adam Lambert are due to tour there in 2020 and the tickets for the show were so popular that they sold out in seconds. When the band released the film Bohemian Rhapsody, once again the sales of the tickets were stratospheric.

In this instance, the loyal fans will now reach the skies throughout Japan with three events in November; full of music and massive fireworks displays.

Officially approved by Queen themselves, the super fireworks event will light up the skies in a blaze of light and effect as the fireworks are perfectly synchronised to some of the greatest hits such as “Somebody to love”, “We will rock you” and the film’s soundtrack the unparalleled “Bohemian Rhapsody”. The director of the display is Ryo Oro, regarded to be one of Japans experts in pyrotechnics and specialist in the programming of pyro musicals. One of the events he is most known for was the 2019 Koyoto Geijutsu Hanabi (Artistic fireworks) commemorating Emperor Naruhito’s accession to the throne.

This will be a ticketed event and is also expected to be very popular so grab a ticket while you can, tickets start from the early bird discount 6,480yen (£51) and the standard seating tickets cost 7,560yen (£60).

The night promises to be an over the top extravaganza of rock music, just like the band. The event will last over an hour long and will be packed with non-stop musical entertainment and over 1,300 fireworks will be released into the night sky, perfectly choreographed to the rhythm, melody, musical instrument and vocals and is not to be missed. As a fan of both fireworks and Queen, this will be something that I will be keeping an eye on myself.

One of Tokyo’s most popular summer festivals is the Mitama Matsuri, and has been held since 1947. It’s a world-famous attraction with hundreds of thousands of visitors and locals attending the event each year to see the spectacle of the 30,000 lanterns hung on the walkway up to the Yasukuni shrine.

The schedule changes every year, but you can expect live music and theatrical performances, traditional dances and witness the 1st bon odori dance welcoming the spirits of the dead. The festival follows Buddhist tradition of Obon; a celebration to honour spirits and ancestors of the dead, so it will come as a surprise to visitors that you can also find Obake Yashiki (a type of Japanese haunted house) at the festival. Despite seeming rather out of place, they are one of the most popular attractions that are visited during this time.

Amongst the stalls, you won’t find the normal festival fare for sale as this is not allowed in the grounds of the shrine. However, there is a scattering of stalls selling snacks and refreshments. Try some of the local food such as takoyaki (octopus filled ball-shaped dumplings), okonomiyaki (grilled pancake with savory ingredients),) or treat yourself to wattame bagged (candy floss). Along with the food why not try the summertime dress and don a yukata (summer kimono) to keep cool in the summer heat.

The celebration each year fall on the 13th July and runs for 4 days, and to see the mitama matsuri at its best it is in the evening around 6pm. This is when all the 30,000 lanterns are individually lit creating a spectacular approach to the shrine and giving a warm glow to the evening air.

This festival is one of the Capital’s best summer festivals and can become very crowded but is a must-see for an insight into the truly authentic Japanese summer experience, and something that you will never forget. 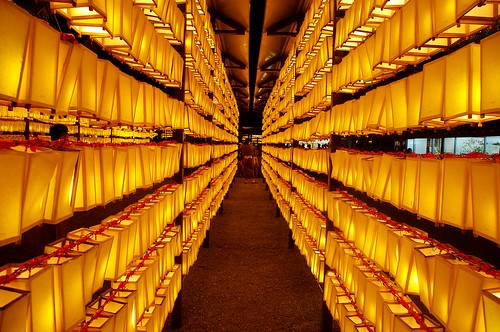