I remember back in the 60s, all the kids of a certain age would compete to get the best looking Guy Fawkes.  This wasn’t anything to do with the competitive spirit, but something much more important.  Back then, from a small pit village in Barnsley, it was all about which street had the biggest bonfire and of course, the best fireworks. Organisation of the event being left to us kids for collecting the wood and funds for our festivities.  Back in an age before the health and safety executive kindly looked after our health for us, and us “kids” were able to buy our own fireworks without any questions asked, our driving force was the money we could get for bonfire night.

The better-looking guys would bring in the most money, so it was in our interest, to rake in as much as possible, sometimes walking into the local town some five miles away pushing a wheelbarrow with our effigy proudly resplendent.  The best spots for ‘guying’ would be taken up early and you really didn’t want to get into a turf war over this so far from home.  Betting shops seemed to be an ideal place to “tout for business” hoping for a lucky win on the gee-gees to come our way – or a few pence of it anyway.

In 1960 the average take-home wage was around £7 a week and a firework fountain would cost as much as 4d for a good one.  This was a lot of money to a young lad of 8, pocket-money for me and my brother back then being a tanner or 6 pence.  4d (there were 240 pennies in a pound back then) nowadays equates to 36p, 6 pence of which is VAT (which was introduced to the UK in 1973), which means that when you consider that our magic fountains better values now than they were 40 years ago.

And much safer these days thanks to our good friends the H.S.E. 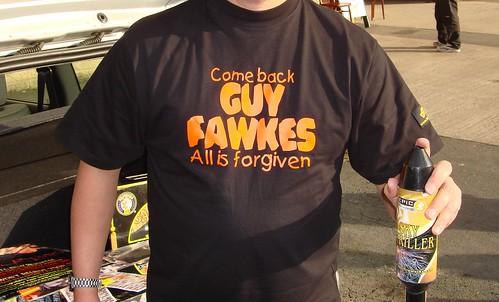 Pyrotechnics could be regarded as the self-external combustion of certain materials due to chemical reactions within the material. This would normally result in the production of heat, light, gas, smoke and or sound. There are a handful of such materials but for the purpose of this article, we will concentrate on one device — the gunpowder.

Ironically, individuals responsible for the handling, safe storage and functioning of these pyrotechnic devices are called pyrotechnicians. Some time referred to as pyro. You may agree with me at this stage that Guy Fawkes is a pyrotechnician. The effect of his activities in this field cannot be overemphasized.

In recent times, many schools of thought have portrayed Guy Fawkes in a sympathetic light and have succeeded in changing public perception of his actions into acceptable fictional character.

Although we may argue that Guy Fawkes and Co., were a pool of unqualified pyrotechnicians, they were able to identify their “display” venue, did the risk assessment, draw up a setup plan and firing sequence just like today’s pyros. Maybe that would have been the first indoor display!!”

In as much as their pyro activities remained a dream, it did change a lot in this field. Movement of 36 barrels of gunpowder today would require ADR licensing. It also calls for more qualified pyros in the handling of such large explosives. In fact, they created a lot of awareness in the firework industry.

The coming together of Guy Fawkes and co., in 1605 also set the pace for today’s pyros forming associations and societies. Thus providing a forum for firework enthusiast.

Just like one said, “Come back Guy Fawkes, you have been forgiven”.

I say these men were the greatest pyros we never had. 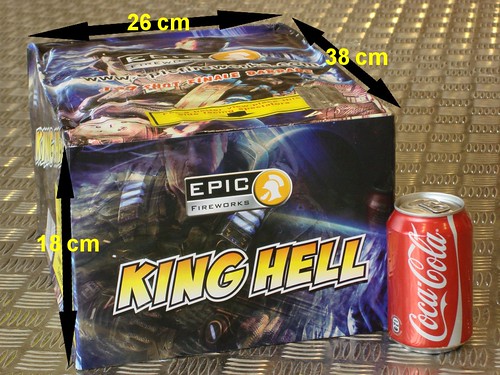 The King Hell from Epic is a stunning V and W fan barrage with multiple 1.3g effects. Every year we go through over 1500 units during our busy firework season. The video below was filmed by one of our customers at a wedding display – watch out for the king hell 🙂

This fantastic SIB has been one of our main-stay of some of the best displays we have seen for the last 2 years. This majestic marvel is a sky filler to behold. The video below is of 1 x King Hell on its own.

They are best set off again in multiples but no film can truly do it justice. A multi-breaking piece that must be seen to be believed. It is loud and impressive and the colours are brilliant.

Rapid, loud, impressive and great colour with a well timed finale sequence. Definitely a talking point of any display and priced at half RRP you simply have to include one or two in this years Bonfire Night celebrations. 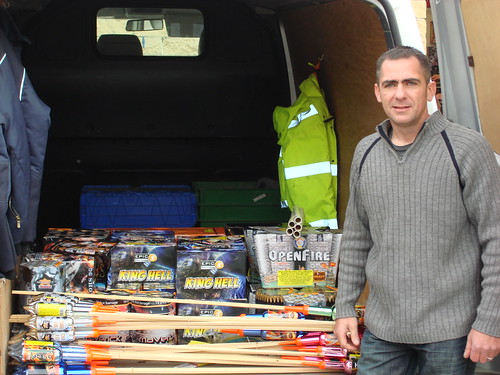