Short of having twenty-five willing volunteers, a professional firing system, or Billy Wiz from the Beano on your firing team, it’s unlikely you would be able to set off twenty-five rockets simultaneously, until now…

Over the last few years, we here at Epic have been secretly developing a new style of firework……Rocket Volleys.

Here’s the low down..

The Thunderous rocket volley fires 25 large rockets from one single fuse, exploding into large bursts of iridescent purple and emerald-green dahlias followed by a huge golden cloud of crackling glitter.

The Skudbuster rocket volley.  This one has “more colour” with vivid red and vibrant green bursts, these more powerful rockets break more ferociously, bringing a few seconds of daylight to the cold November skies.

Light one single fuse and 25 large rockets soar upwards, illuminating the night sky, creating a canopy of super bright bursts of varying colours depending on which item you select and you’re guaranteed to finish off your show in Epic style.

In fairness to all concerned the hugely popular volleys will still be offered on a first come first served basis, but we are happy for customers to place their orders now which we can hold until required for Weddings and Bonfire Night and any other celebration to guarantee you are one of the lucky few hundred in the UK to experience these boxes, which we expect to grow in popularity year after year as more and more people experience the spectacular and unique rocket volleys.

…and the good news is… most of the rockets are back in stock. The video below is from Saturday 27th July when the epic gang unloaded 2 x 40ft High Cube containers worth of rockets – and a load more rockets to come 🙂

The fascination with making your own never fades from being a young boy and as we are all 10-years old at heart, we thought you might enjoy this educational piece to see you through the long dark nights for some fun and frolics.

Making rockets from things that you have around the house will cost just a few quid and is great fun too. You will need matches, cheap tin foil, a pin and a couple of paper clips.

• Wrap a small piece of the thinnest tin foil you can find (weight being important in this experiment) around a match with a pin held along the side which will be removed to create the tunnel for expanding gases generating thrust
• Make sure that the foil forms a tight seal around the head of the match and along the pin for the tunnel and create a point for the top of the rocket – this helps flight – remove the pin
• Bend a paper clip to create a launch pad – not very stable so feel free to experiment with other ideas – we also tried making a launch pad with tin foil which had varied results and some blue-tack which again, had mixed results too
• Then apply heat – preferably a long-necked lighter (like the ones you get from any number of market stalls for lighting barbecues) and wait for launch

Some of the ones we experimented with managed up to 10 feet and over and the others fizzed and died or managed an inch or two only but it was great fun anyway.

Just remember, you are using matches so safety first – only do this in a well-ventilated area and wear eye protectors. It is also a good idea to keep a bucket of water available to enable you to extinguish any problems that might occur. 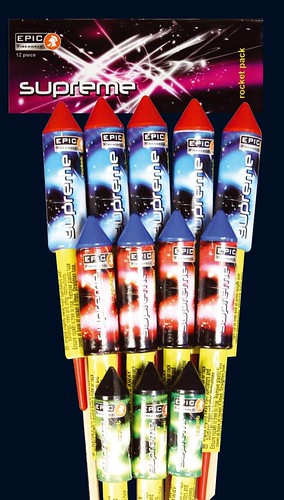 Below is a firework video by Mixologist, who is a regular UKFR forum member. He decided to launch all 12 Supreme rockets at once!