The Las Fallas Fiesta (the fires) is acknowledged as being Valencia’s most recognised international festival and is full of lights, flowers, traditional costume, music, bonfires, plenty of gunpowder and the army of the Fallas (the fires).

As Valencia and the surrounding region say goodbye to the Winter and welcomes in the Spring, thousands of locals, visitors, and pyromaniacs descend on the city to witness one of the biggest festivals to be held in South-Western Spain.

Officially the festival does not get into the full swing of things until around the 15th of March but from the 1st of the month, at 2pm daily, there is a mascleta outside the Plaza del Ayuntamiento. This concert of firecrackers is a popular event to witness, with neighbouring groups competing for the most impressive volley. All the mascleta end with the terramoto (earthquake) where hundreds of the firecrackers all explode simultaneously.

On the night of the 15th March, the Planta of the Fallas takes place. Workers put in an all-night shift to install around 800 figures in every corner of Valencia. The colourful ninots start to take shape some up to 20 feet tall and placed in groups that tower over the excited below. Some of the ninots are based on political figures, soap stars, tv, sports idols or some are just the imagination of the creators. On the 16th is when the judging takes place and then the ninots are paraded through the streets. These scenes of characters can be seen and enjoyed in the days following until the La Crema takes place.

In contrast to La Planta the crema marks the end of the festival in the City and is known as the most popular event internationally. The monuments are built and exhibited in the street to be burnt and this happens on the 19th and 20th reducing the splendid monuments that stood once proudly in the streets to ashes amongst the hundreds in the crowd that gather to witness the special event. The celebrations always end with Nit Del Foc (night of fire) on the 18th march. This is a fantastic firework display in the Paseo de la Alameda lighting up the skies along with light displays and music.

This magical event has become the centre piece of celebrations in and around Lake Garda annually for the last 60-years.

Riva del Garda plays host to tens of thousands of visitors annually, both from within Italy and of course from around Europe and the rest of the world. Notte di Fiaba translates as ‘fairytale night’ and with fun, fantasy and fireworks, it really is the perfect combination. 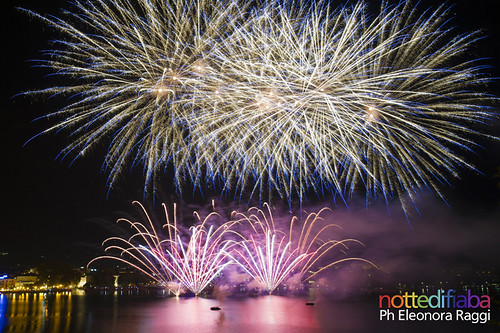 The event has up to 100 activities to take part in or observe but they are all fairy tale related and this year, the main theme for 2018 is ‘Little Mermaid’ so the entertainment is suitable for the whole family.

The fireworks will be the responsibility of Martarello Group, Italy which was originally set up almost 100 years ago by the founder, Giovanni Martarello. In 1949, his son took over the business but sadly, following his death, the business became the responsibility of his wife Maria. With 5 children to care for, she went on to show incredible strength and fortitude as she continued to grow the business into one which is acknowledged around the world for the incredible displays the team have created.

The firework display will take place at 10pm and is completely free of charge so pick your spot, sit back and watch the elegant fire-dance in the sky over the stunning setting of Lake Garda.

From the very first event back in 1979 Bristol balloon festival has steadily grown to become the second biggest events of its type in the world.

With 300 balloons in attendance this is the largest collection of hot air balloons in the UK, being slightly overshadowed by Albuquerque.

In its 36th year this free balloon festival brings in around £13,000.000 to the local economy over the four days, such is the popularity of the show the nearby Clifton suspension bridge is closed both to traffic and pedestrians due to the stress of the thronging public on the bridge.

Starting at 6 am on the 7th August with “breakfast and balloons”, some of the best balloon pilots in the world will lift off for a mass assent, when you consider that around 30 balloons will lift off simultaneously the level skill required to attend this event would have to be of a world-class standard.

On the 10th August 2013 45 balloons landed in single small field near to Cadbury’s former factory in Keynsham breaking a festival record.

Over the years balloons have attended from all over the world in unusual shapes and designs, from UFO’s, Rupert the bear, a kiwi bird shaped balloon from New Zealand an upside down balloon and even a Tesco shopping trolley.

As always there will be something for everyone, from arts and crafts stands to the Red Arrows, the “Exit” parachute team, R.A.F Falcons and a whole host of other entertainments and attractions for visitors for all ages.

On Thursday and Saturday nights the spectacle that is the “night glow” watched annually by over 100,000 will culminate in a huge fireworks show starting at 21:15 and presented by Skyburst fireworks, the firm which fired £7,500 of fireworks in a few seconds on the Clifton suspension bridge to celebrate the arrival of the Olympic torch to Bristol.

Held until recently in the second week of September, the change of date promises better weather for all attending, less muddy ground to contend with and less chance of flight cancellation due to the high winds experienced in the later months.

We here at Epic would love the chance to attend the fireworks but as the event coincides with our busiest wedding period it is unlikely the boss will allow time off.