Danang is gearing up for the Largest Fireworks competition display next March. The skies above the Han River will be filled with a spectacular artistic fireworks display of colours and sound presented by the world’s leading fireworks manufactures.

Next March will be the 3rd edition of the musical fireworks competition hosted by the city of Danang. The event is being described as the biggest and best fireworks competition in the world because of the scale of the display over 2 nights: 3 displays on the opening night and 2 displays and the prize giving on the following and final night. It is simply the best annual event of its kind staged in Danang.

With over 500,000 spectators every year including tourist, the organiser’s, and the city of Danang have achieved their objective and goal in promoting Danang as a preferred tourist destination.

Hanoi will celebrate its 1,000th birthday in 2010 with a series of activities in Hanoi and around Vietnam.  DIFC 2010 is one such celebration event activity selected to be associated with the Hanoi 1000 celebration.

Through a meticulous selection process, participating teams were handpicked from America, France, Portugal and Japan and the representing Host country is the Danang military fireworks team.

These teams have been responsible for most of the musically choreographed fireworks displays at international prestigious events. The selected four international renowned firework manufacturers have won numerous past competitions around the globe.

For Two nights in March 2010, tagged as the biggest event in Vietnam, the skies over the Han’s River are to be lit up by a sequence of world-class Pyro Musical performances to celebrate Danang’s 35th Liberation anniversary.

The official team for DIFC10 is ‘Legend of Han River’. Participating teams would have to choreograph their show around the theme. Each team will have to produce their pyromusical displays for a minimum of 20 minutes.

The DIFC10 participant will represent their respective nation and ‘wow’ the spectators with their magical displays over two nights.

The Art of Musical Fireworks Concept:

Musical fireworks technique used at the competition is an art form known as “Pyro-Musical Synchronization” and takes into account the essentials such as timing (measured in fractions of seconds), music choices, rhythm and composition design.

According to the producer, “Fireworks designed for DIFC requires thousand of painstaking hours to be developed. The teams manufacture special effects exclusively for the competition based on their theme.

By the sounds of it, this is one competition I know I cannot wait to see. On such a big scale this is sure to be one to look forward to in 2010 for anyone that loves anything pyro.

The Chinese team amazed the audience and won the first prize for their performance based on the famous love story between Luong Son Ba – Chuc Anh Dai, a Romeo and Juliet of Chinese last night (Mar. 29).

The Spanish team came second, the Australian team won the third and the Vietnamese and Philippine teams took the encouragement prizes.

The organizing board of the Da Nang International Firecracker contest said that over 7000 Vietnamese and foreign visitors came to Da Nang during the event. All hotels in the city were fully occupied.

This beautiful shot is of the fireworks over the City of Da Nang in Vietnam where they hold an annual fireworks festival which has been competed for since 2008.

The teams from every corner of the world come together to battle it out to be crowned International Fireworks Champion as they paint the skies over the City with beautiful colours and effects. 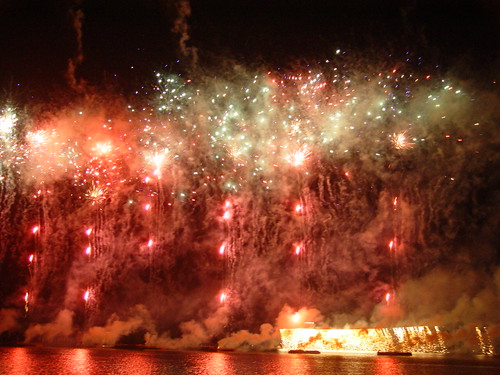