This weekend, Saturday 16th November, see’s the last of the public holidays by the famous Bonfire Societies taking place (the final ones for Robertsbridge, Barcombe, and Hawkhurst are ‘invitation only’ events).

The Nevill Juvenile Bonfire Society has over 400 members and they continue the tradition of torchlit processions which began with just two men, who had suffered the indignity of having their Bonfires destroyed before the 5th 1967.  They decided that they would band together, create a new bigger Bonfire and invited 40 friends and family to take part in the first torchlit processions.

Each of the SBS (Sussex Bonfire Societies) has its own set of ‘costumes’.  The Nevill Juvenile societies are Suffragettes, early 20th century military uniforms and medieval dress.

Although the Nevill society is termed as a ‘juvenile’ society, the members are of all ages and backgrounds.  Their ethos is to build on the community spirit and primarily to get the youngsters away from their electronic devices into the fresh air, learn skills that have been taught from father and grandfather to son and daughter through the years as well as having a good time.

The most famous (or infamous as the case might be!) of the SBS is Lewes Borough.  They ALWAYS hold their event on the 5th November and are generally joined by the representatives from Commercial Square, Cliffe, South Street, Southover and Waterloo societies.

Each of them creates a Guy Fawkes with a difference that is more of an effigy, usually representing something in the media which has caused some drama along the way.  Previous examples have been Wayne Rooney (amid allegations about his private life and of course his U-turn on his football contract), Katie Hopkins (the very opinionated woman who spouts drivel in the press at every given opportunity) and even Donald Trump has come under fire (or on top of the fire, depending on your viewpoint).  This year’s effigy of note was of the current Prime Minister Boris Johnson urinating on newspapers aboard a Brexit rollercoaster and one about the charge for the TV licence fee re-introduction for the over 75’s.

Firecrackers, torches, burning tar barrels, a huge bonfire, and spectacular fireworks are the order of the day.  Over at Edenbridge Bonfire Society, they are set to set fire to an effigy of the speaker of the House John Bercow.

It is not as over-crowded as the more publicised one at Lewes but it certainly gets you out of the house to celebrate an event which has been taking place since the introduction of the Act of Parliament in the earliest part of the 17th century.  Indeed, the Bonfire Societies, whilst indelibly connected to the occurrences of the 5th November 1605, were actually set up in the middle of the 16th century, as a result of the slaying of several local men (and women) who were accused of heresy because of the ever-changing Catholic-Church of England power struggle at the hands of Queen Mary I.

If you fancy getting your pyro fix from a completely different view, then why not climb aboard one of the seven 1930’s style pullman carriages of the Northern Belle, which is known as Britain’s answer to the iconic Orient Express.

A special trip has been designed to leave from Liverpool Lime Street Station at 5pm on Saturday 2nd November, before picking up more passengers at Manchester Victoria and Preston before returning at 10:30pm. 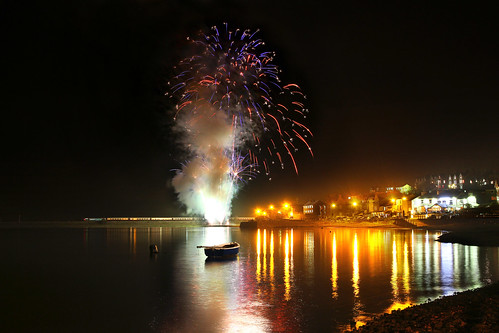 There will be space available for up to 300 passengers to enjoy this very special evening. The journey begins with canapes and champagne and then everyone will be seated and presented with a delectable seven-course meal, created by the talented chef Richie Cunningham, along with onboard musical entertainers, to keep everyone occupied.

Once the Northern Belle reaches her stop at Arnside in Cumbria, the carriages will be plunged into darkness so that everyone can sit and watch the fantastic firework display taking part just yards away on the beach.

Ticket prices begin from £275 per person and this includes:

For a different way to commemorate the day Guy Fawkes’ plot to kill the King was foiled, but still, enjoy an evening packed with plenty of fireworks and bangs.

As November the 5th approaches, the Ottery locals are preparing the barrels for the last soaking of tar ready for this year’s blazing celebration.

The exact origins of the celebration are unknown, and there are several rationales and myths about how the tradition began.  Alternative reasons are; the fumigation of the cottage and that the flaming barrels were lit as a warning that the Spanish armada was approaching. The only thing of any certainty is that the event dated back to 17th century and the gunpowder plot making it around 300 years old.

Earlier in the history of the event, the barrels were set alight and rolled down the streets.  Somewhere along the line, this was thought as a little too tame, and it was changed to the barrels been carried instead through the town something that the Ottery residents are very proud of and today attracts thousands of visitors to witness the spectacle each year.

Each of the barrels is sponsored by the Ottery St Mary’s town centre pubs, and the rolling takes place outside, or in some cases where a former pub used to be. Not just any Tom, Dick or Harry is permitted to carry the barrel; this is something that you have to be an Ottery St Mary resident to do. 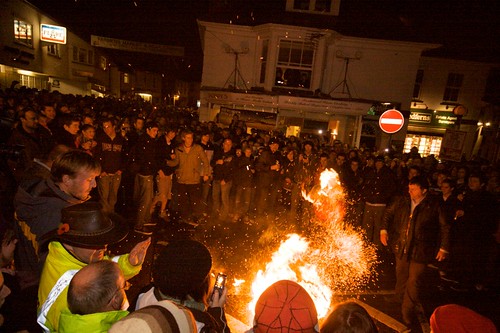 Many of the families have taken part in the event for many generations and there is a strict hierarchy on whomsoever gets to carry a barrel. The adult’s ‘barrel’ events are held at 7pm and there is an event for the children to have a go around 4pm. Make sure that you don’t miss out on the traditional midnight ‘barrel’, the biggest and most spectacular display that is held in Ottery’s main square.

Another fiery and integral part of the annual carnival is the epic bonfire situated on St Saviours Meadow. Three weeks before the carnival, the gathering of the materials for the bonfire takes place, and then a week before the festival is the building of the bonfire.  They are duly proud of their Bonfire as it usually stands at around 35ft high and the girth of it around 50ft.

The guy topping the bonfire was originally made by the young family every year from 1958 to 2009.  Nowadays, there is a guy competition held for the children in the community with the winner topping the bonfire. Most people associate the bonfire with the fairground as they stand adjacent to one another. This is an opportunity for the photographers amongst you to get some perfect shots as the blazing glow of the fire is complemented by the bright coloured lights of the funfair.

To make funds for the event year on year there are sales of memorabilia on offer along with programmes that give you a run-down of where the barrels will be at what times, these sales keep the tradition going. The event is free for all to enjoy but as you can understand due to the popularity of locals and from visitors the population of the town doubles. If you don’t like crowds, then this is not an event for you. But if you’re a bit of fire lover then get along and witness first hand one of the oldest events taking place in the UK today.