From Wikipedia, the free encyclopedia

Diwali, or Deepavali, (also called Tihar and Swanti in Nepal) (Markiscarali) is a major Indian and Nepalese festival, and a significant festival in Hinduism, Sikhism and Jainism. [1] Many legends are associated with Diwali. Today it is celebrated by Hindus, Jains and Sikhs across the globe as the “Festival of Light,” where the lights or lamps signify victory of good over the evil within every human being . The festival is also celebrated by Buddhists of Nepal, particularly the Newar Buddhists.

According to one theory Diwali may have originated as a harvest festival, marking the last harvest of the year before winter. In an agrarian society this results in businessmen closing accounts, and beginning a new accounting year. The deity of wealth in Hinduism, goddess Lakshmi is therefore thanked on this day and everyone prays for a good year ahead. This is the common factor in Diwali celebrations all over the Indian subcontinent.

In North India, it is the homecoming of King Rama of Ayodhya after a 14-year exile in the forest.[2] The people of Ayodhya (the capital of his kingdom) welcomed Rama by lighting rows (avali) of lamps (deepa), thus its name, Deepawali, or simply shortened as Diwali. Southern India marks it as the day Lord Krishna defeated the demon Narakasura. In western India it is also in honor of the day King Bali went to rule the nether-world by the order of Vishnu. (There is another festival ‘Onam’ which is celebrated in Kerala around the month of August to mark this legend)

Diwali comes in the month of October or November.

The “Diwali Dazzle” is the first of our larger Diwali Fireworks display packs and is aimed at a more discerning audience. We have focussed here on creating a professional looking all-round display with massive effects, beautiful colours, and terrific sound effects. With all large Single Ignition Barrages and huge rockets, this really is a sensational Diwali Night Display. Featuring amongst others the incredible six machine. This massive 96 shot finale barrage will literally fill the sky above you with beautiful giant cherry-red stars and huge multicoloured peonies and strobing crackling.

This very popular display pack boasts some of the largest display fireworks available anywhere in the UK. Designed and priced to appeal to fireworks connoisseurs and display organisers looking for sheer class and great value for money. This one also contains one of our favourites, the thrilling 36 shot Metal Storm with its whirling tails of colour and thunderous reports. This pack guarantees quality every time for a display that they will be talking about long after the last fuse has been lit. Make it a night to remember with the Diwali Illumination display pack. 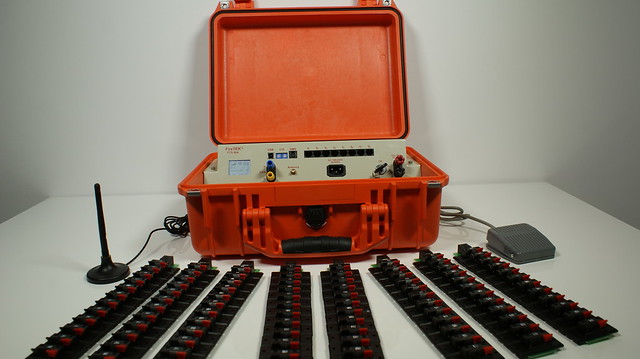 The fireworks ignition system has control over 30 unique channels. Each channel consists of a transistor circuit which switches the power source on and off. The system is powered by a 12 Volt 1.3 Ah sealed lead acid battery. When not in use there is a DC input jack mounted that allows for recharging through a wall wart. An arming key was incorporated as a safety mechanism (When unarmed no power is applied to the transistors). Control of the system is accomplished by a serial port set at 38.4 kbps. Through this port the user can set the state of any of the channels, check the status of the arming key and get the voltage of the battery. The entire project is housed in an aluminium suitcase.