Have you ever wanted to be a part of a World Record attempt?

A group of firework enthusiasts have come up with a cunning plan to create, build and successfully fire the worlds largest fireworks display shell. For those of you that don’t know what a shell is, please see an example picture below of a 16-inch firework shell.

With the assistance of the Kickstarter Campaign. The team have from now until the 3rd April 2014 to raise enough funding to make this attempt a reality and with a target of $55000.00.

For those of you wondering why they need $55k, here is the breakdown by Fred Hopper:

The $55,000 is based on the estimate of having the shell supplied with Chemicals,

We will also need to have the Stars made at a cost of about $5000 on top of the chemicals, and I am pretty sure I am underestimating because we may very well need to make some moulds and tooling for the press. So, make it $6000

With the Tube, using the External Concrete method, We are looking at another $5000 for the forms (3 ten foot lengths, 60″ n Diameter) and the concrete to fill in around. Could be cheaper if we fill it with sand, and of course, we could not feel good leaving a 60″ hole thirty feet deep hanging around, so backfill with sand.

We are up to $45,000 estimated right now and have not yet fulfilled the incentive awards for the Kickstarter backers. That will be mainly Wallet Cards, CD’s and Photograph’s, T-shirts and Hats.

If we pay for an adjudicator from Guinness, they want $8000. I told them we will probably have to do that part ourselves, and as we know, there are hoops to dive through.

If there is anything left (it wont be much unless I am underestimating the power of “crowdfunding” (I Hope!), split between the team for a Launch Party. I have tried to keep it as close to the bone as possible, but It will take some funding, as you know.

A shell (short for bombshell) is a spherically shaped firework mainly used in professional firework displays for huge events like the Olympic Games or New Year’s Eve. Shells are fired from a mortar tube and will reach high into the sky and will burst at anything from around 117 feet for a 2-inch shell to 481 feet for a 36-inch shell. Below is a video of a typical firework shell.

In this case, the proposed shell is going to be 60 inches in diameter and will weigh in the region of 1700lb. The burst on a shell is dictated by its size and works on the principle of 45 feet diameter burst per 1 inch of shell diameter (this will depend on how tightly packed the shell is too).

Using the equation a two-inch shell will give a resultant burst of 90 feet. So the supersized shell, in this case, will give you a burst which is a staggering 2700 feet across.

The current World Record is held by Japan. They fired a 1534lb shell of 543 ¼ inches into the skies over Hokkaido on 15th July 1988 and the burst was a staggering ¾ of a MILE across.

The team planning this have some challenges ahead within particular getting a shell of this weight and size into the air with enough force to lift it but without affecting the integrity of the actual shell.

Furthermore, the stars to be used will have to be extra long burning as they need to burn as long as possible, and at the same time, ensure that they will not hit the ground still burning. Stars, as outlined in one of my previous blog posts, are little cubes of an explosive mixture containing a mixture of salts and metals to create colours, sparks and effects.

The proposed launch dates and site are still at the planning stage but they anticipate that it will be ready for launch late 2015 and they are looking for a ‘space’ big enough to enable safety distances of 8400 feet (over a mile and a half wide).

If you do wish to make history and of course gain yourself a Guinness World Record certificate of participation, why not help the team out. You can pledge anything from $1 to $7500 or more and each different level of funding will entitle you to a bigger slice of the cake.

If (and we hope with all our hearts this is a when) this attempt is made, we will bring you all the news. 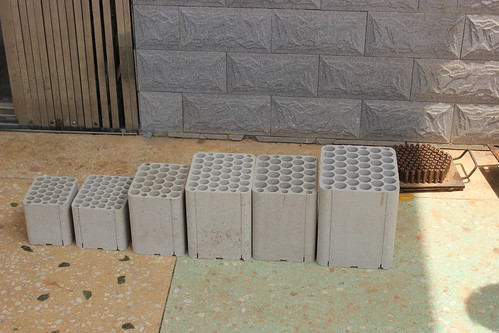 I bet you’re all thinking WTF is that above picture all about!

Well, before I tell you, let me give you a brief reminder (and apologies if you already know this) of what kind of work goes into making a cake/barrage.

Step 1 involves rolling the tubes. Many years ago this was done by hand, but in the past 10 years or so, machines have been introduced to roll the tubes, just like below. 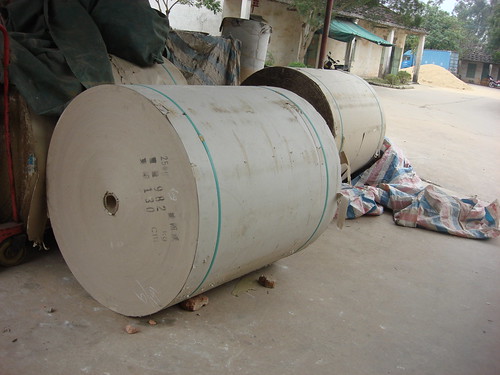 Once the tubes have been rolled and cut to size they are then left outside to dry. Depending on the time of the year, sometimes the tubes are placed in a ‘drying room’  due to the rainy season or damp weather. Having strong tubes is crucial – more info here.

Ideally, the tubes that are dried naturally tend to be much stronger. 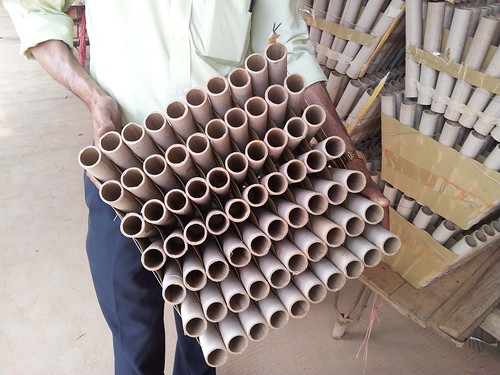 Step 3 involves ‘breaking down’ the ‘red China earth’ into a fine powder as shown in the video below.

Machines (video below) are then used to turn the fine red powder into a clay bung (sometimes these are made from plastic to keep the weight down) to one end of the tube. This acts as a solid base for the firework to recoil against and forces the effect to go upwards.

4. Insert the lift charge and effect chamber into the tube

Once the tubes have been rolled, dried, and bunged at one end, the next process is to insert the lift-charge and the effects. This could be stars, whistles etc.

5. Linking the tubes together

Once you have all the tubes loaded with the different effects, the next job is to link them all together, using glue, tape, visco fuse, paper and loads of patience.

This is where you add a cardboard disc inside the tubes to stop any composition from falling out and it also helps to contain the energy inside the tube once it starts its chemical reaction.

This involves wrapping a label around the firework and sometimes on top of the fireworks. 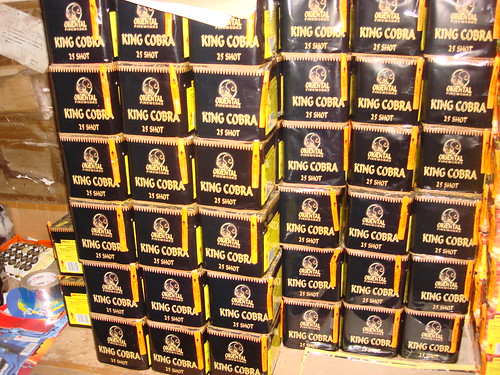 8. Place the fireworks into the shipping carton

The final step is to put the barrages into the UN carton ready for shipment. 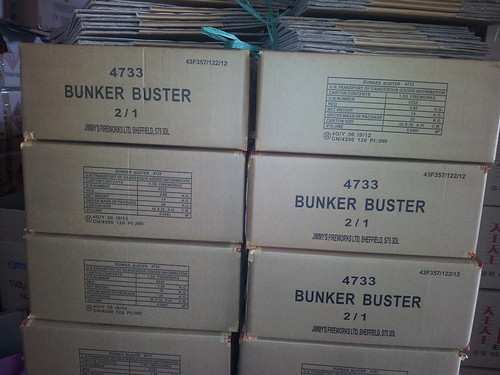 As you see, making fireworks is a very time-consuming, labour intensive job. So, back to the opening paragraph, WTF is this: 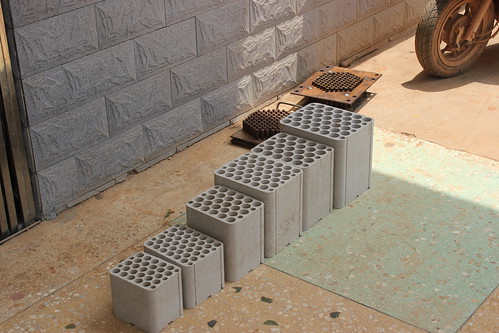 WELL, THIS IS THE FUTURE OF FIREWORK CAKES / BARRAGES – AND YOU SAW IT HERE FIRST

This will be how cakes and barrages are made in the future. The mould is made 100% from recycled materials including vegetable fibre, recycled paper, starch, calcium carbonate, and glue and it’s extremely strong – which makes it even safer.

There will be no need to roll the tubes, wait till the tubes dry, insert a bung……etc……. Now, all you do is insert the lift-charge and effect chamber, add the cardboard disc, add the fuse underneath (see pic below) and wrap the label around the firework. 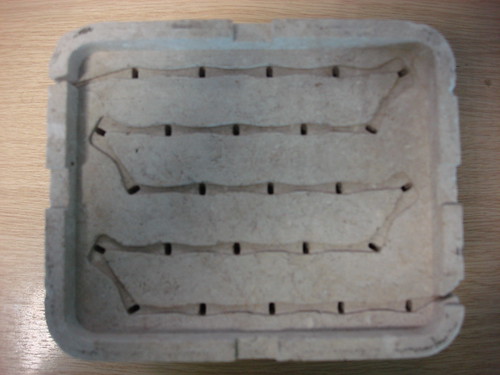 In theory, the price of firework cakes and barrages should come down as this process removes a lot of production time (and the labour costs in China are going up and up and up every year) but the initial investment in the new machines that produce the mould is very very expensive.

So, a very well done to our Chinese suppliers for coming up with this awesome idea – the only thing they haven’t figured out (yet) is that they can’t produce fan cakes this way !

But watch this space!

More news on this fantastic development to follow soon 🙂

UPDATE FOLKS, CHECK OUT THE VIDEO BELOW 🙂

Check out the video below by our good friend David DeSafey from Pyro Talk in the USA, he explains a little more about the importance of strong high-quality tubes.

Here’s a shot video of a production line in China…

Wyn will make another trip to China in the middle of July 2013 to check the remainder of the stock before shipment.