For the first time, in this the 30th event of the annual Macao International Fireworks Display Contest, the competition will involve representatives from 12 nations – more than ever before.

The contest, which is held over six nights from September 7 till October 5, will be the most comprehensive and spectacular series of fireworks displays taking place in this tiny Special Administrative Region of the Peoples Republic of China.

Further to this year’s competition, there is an anniversary fireworks night scheduled for December 20th which is the date of the handing back control of this little area from Portuguese rule in 1999, followed by the traditional New Year fireworks on December 31.

Six evenings of enchanting fireworks and music pitting the abilities of some of the world’s best professional pyrotechnics teams against one another in the skies over the stunning Macao Tower,

Each evening of the event, two teams will take part and their display lasts between 10 and 15 minutes, firing at 9pm and 9.40pm respectively. This trophy is one of the most coveted international trophies in the pyro industry.

In addition to the firework displays, there will be cultural dance and music, a carnival and local food and drink outlets with the delicious street food of every kind.  Plus, the event has numerous competitions running on their web page including photo competition, drawing contests, and trophy design so if you are arty or have an interest in photography, check out the website for more information.

The food of Macao is clearly influenced by their Portuguese heritage with much of the architecture looks more like a street in Lisbon rather than an area in Asia.  The food tastes are also more of a fusion of the Macau and the Portuguese tastes with Portugal’s national dish of a sweet egg custard tart in puff pastry still being top of the list closely followed by the humble ‘pork chop bun’ which essentially is a well-seasoned pork chop in a warm buttered crusty roll. Mmmmm

Eating out is much the same as in any major city and the place caters for everything from fine dining to tasty street food and you can expect great seafood thanks to the City’s position on the coast and the area eats LOTS of Pork.

The cost of living is considerably cheaper than it is in the UK BUT, it is a VERY small place which is packed with high rise buildings (at only 12.7 square miles, it is THE most populated region in the World). Dubbed the Las Vegas of China, this little region attracts HUGE visitor numbers – last year, although there are on 670,000 or so residents, there were a staggering 38 MILLION visitors last year.

Last year, the event was won by Liuyang New Year Firework Trading Company Ltd from China and the runners up were Marutamaya Ogatsu Firework Co. Ltd from Japan and as a result, China will be firing on 1st October which is the regions National Day.

Check out the video of Japan’s display from 2018:

Teams competing are as follows:

Check out the clip of last year’s winning display:

We will, of course, bring you the details of the winners after Bonfire Night. 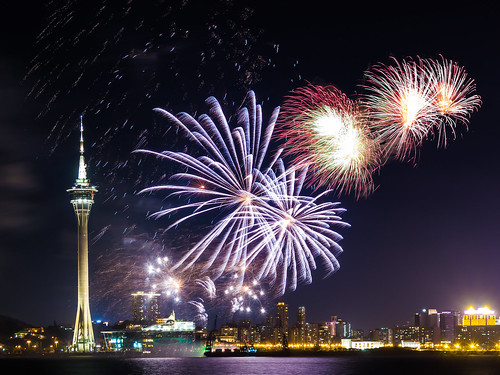 Over the years more than 100 professional international display teams have taken part in this amazing competition. The area is packed with those enjoying a luxury holiday and the fireworks can be viewed from numerous vantage points including the promenade, the Macao Tower and Taipa Island.

The competitors will all adhere to a theme as follows:

The event ends on 1st October which is China’s National day so the final days events will be particularly important as both teams competing hail from China so it is certain to be a huge event.

The display from the team representing GB are the display arm of Black Cat Fireworks UK concentrates on the Bond Theme which they have perfected so we are really looking forward to seeing what has been changed for the new competition.